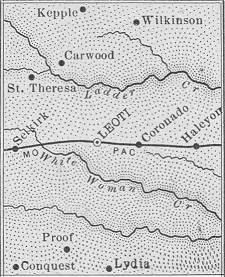 Wichita County is located in the Southwestern Kansas, and its county seat is located in the city of Leoti. The county was originally home to the Native American tribes of the Pawnee and the Wichita (the tribe for which the county is named), but they had already vacated the area before the first land cessions were made to the United States government.

Wichita County was one of the last areas of Kansas to be settled due to its location. Its location at the time was almost forty miles from both of the railroads, the Kansas Pacific and the Santa Fe. Only after other areas became overpopulated did settlers begin to move to Wichita County. The first signs of civilization in this county began with five large ranching operations: the Kitchen Ranch, the Sinn Ranch, the Russell Ranch, the Edwards Ranch, and the Holden Ranch. John Edwards, owner of Edwards Ranch, was one of the first settlers and was elected to be the first sheriff of the county.

The plat for a town site in Leoti was filed in 1885. By December of 1886, Governor Martin was ordered by the Supreme Court to organize Wichita County.  After a bloody dispute with the neighboring Coronado, Leoti was chosen as the Wichita County seat. Since then Coronado has become a ghost town.