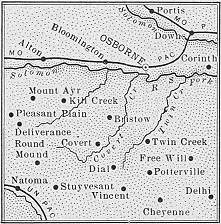 Corinth was a small community just south of Downs that was settled by German immigrants. James Terry was the first to settle in the Corinth Township. Terry built his homestead on a prominent hill within this region, and today this hill is known as Terry's Bluff.

In late 1869 a group of Dutch-speaking settlers from Pella, Iowa, began taking homesteads along Oak Creek, in what is now northwestern Mitchell, northeastern Osborne, southeastern Smith, and southwestern Jewell counties, starting at the creek's confluence with the North Fork Solomon River and progressing northward. The next year a colony of settlers from Holland, Michigan, called the Rotterdam Colony, also arrived. In 1871 the Rotterdam Post Office was first established in northeastern Osborne County to service the growing community. Twenty years later this post office was later renamed Dispatch (after the way the mail was "dispatched" by horseback) and moved to a county road intersection on the Smith-Jewell County line that became the center of the Dispatch community.

Dispatch had at one time two stores and other businesses going. The post office was closed in 1891 and the Great Depression and subsequent World War II aided in the decline of the community. At present the Dutch Christian Reformed Church still operates at the site of Dispatch, and descendants of those first settlers living in the area still speak the Dutch language.

Osborne can lay claim to being the only city in the Solomon River valley to be founded by a colony. On April 10, 1871, under the leadership of Colonel William Bear and Major Henry Markley, a scouting party of 44 men, women, and children rom Berks and Lancaster Counties in Pennsylvania left Lancaster on a train bound for Kansas, where they sought a place to found a new city. "The Pennsylvania Colony," as they were called by the newspapermen of the towns they traveled through, built a strong stockade in the South Fork Solomon River valley in Osborne County and laid out a new town site on May 1, 1871. Colonel Bear suggested that the name of the new town be called Osborne City after Civil War veteran Vincent B. Osborne, and the later surrounding township to be called Penn after Pennsylvania founder William Penn. That September the remaining 250 members of the colony arrived from Pennsylvania and the full colony went about establishing a permanent town.

The Pennsylvania Colony members were of Moravian, Brethren, and German Church of Christ religious denominations. They spoke both German and English and often together in a unique mixture of sound and meaning. German continued to be spoken in the community until World War I when its use was largely discouraged.

Organized in 1871, Osborne County is named after a private of Company B, Second Kansas Cavalry, Vincent B. Osborne. While aboard the steamer Anna Jacobs near Joy's Ford along the Arkansas River, Private Osborne lost his right leg.

Although the 1870 census revealed only thirty-three residents, Dutch, German, and German-speaking Swiss settlers soon rushed to the area. The first settlers included Zara M. Hill, who made the county's first land entry, and the two Bullock brothers, who established the county's first permanent settlement in 1870. By 1880, the county's inhabitants numbered 12,518.

William G. Culter's History of the State of Kansas (1976) was first published in 1883 by A. T. Andreas in Chicago, Illinois.

Nobel L. Prentis' A History of Kansas was published in 1904 by Caroline E. Prentis.

In 1871 and 1872 five families from the town of Seewis, Switzerland settled along Twelve Mile and Dry Creeks in what is now Ross Township in northeastern Osborne County. Over the years others joined them and what became known as the Rose Valley community came into being. With such names as Baertsch, Huiting, Maier, Monstein, Senti, Stutheit, Sutter, and Yost, these German-speaking Swiss still have many descendants in the region. A number of those early settlers became famous through their inclusion in John Ise's classic Kansas novel Sod & Stubble, set in the area and first published in 1936.

The Rose Valley Church began as part of the Evangelical faith, with services being held in both German and English. After World War I the services were held in English. Today the Rose Valley United Methodist Church still holds services and preserves the legacy of the community.