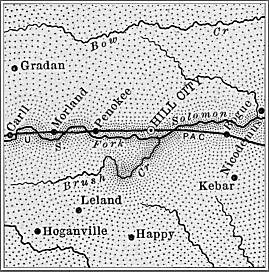 A town site named Fagan was located 1/2 mile west of the railroad bridge that crosses Wild Horse Creek 1 mile west of the present town of Bogue. Several buildings were nearly completed and the Wild Horse post office was moved there by June 17, 1887. However, the town site was never sold because Mr. Minor, the owner of Fagan, and the railroad could not agree on a price.

A Mr. Bogue bought some property 1 1/2 miles east of Fagan and founded the town of Bogue sometime in the early fall of 1888. It became a boom town with a bank, several different stores, a blacksmith shop and a depot on the L & CR rail line. All in all, 30 buildings had been erected or moved into Bogue by October.

Platted on July 1, 1879 by Willis Ellsworth and Asa Jones, Gettysburg was named after Joseph Getty, an early day resident. Gettysburg was one of the towns in the running for the county seat. Millbrook was its main competitor.

W. R. Hill came to this area in 1876 and founded the town site which was named for him. Hill City was platted on June 16, 1879. After several elections for the county seat which Millbrook, 3 miles to the southwest, had won, Hill City won the right to be the county seat in an election held on March 16, 1888.

The railroad came through in late 1888 thanks to the efforts of J. C. Pomeroy, a Boston millionaire. Mr. Pomeroy started building the courthouse before the election and the county commissioners met for the first time in the new building on January 8, 1889.

Located about three miles southwest of Hill City, Millbrook was platted on April 8, 1879 by a homesteader named N. C. Terrell. He owned the general store that was established in the fall of 1878. Millbrook was named the temporary county seat on April 1, 1880 by Governor John P. St. John, and it retained the county seat following an election in June. The choices were Millbrook, Gettysburg, Hill City and Roscoe. Another election was held in July 1881 and Millbrook got 473 votes to Gettysburg's 349; shortly thereafter people started leaving Gettysburg to move to Millbrook.

A tornado (or cyclone as it was known in those days) hit the town on August 4, 1887 and basically wiped it out. Hill City then decided to take advantage of the downfall of Millbrook to bring the county seat to them. The voters in the election held on March 6, 1888 decided that Hill City would become the county seat. The Millbrook post office was discontinued on August 15, 1889 and moved to Hill City.

By 1895, an act of the Kansas Legislature vacated the town sites of Roscoe, Gettysburg, and Millbrook.

The town site was platted on April 18, 1890 and named Fremont, presumably for the famous explorer, John C. Fremont. A post office in the area was established in May 1881. The plat of Fremont was filed on October 17, 1884 by J. B. Smith who said he was the founder. David C. Kay was also a founder. It was considered a government town site and people would get their land at no cost, and as a result, there was a period of rapid growth.

A bond issue was voted on for a railroad in May 1888, and the majority of the people voted in favor of it. In August, the railroad changed the town's name to Kalula, but the post office remained as Fremont. The first train came through in October 1888. By 1890, Fremont was no longer a government town site, so the town was surveyed and platted. The residents never liked the name of Kalula, so in April 1892, the name of both the town and the post office was changed to Morland.

The first settlement in this area was made by W. E. Ridgely on May 18, 1872, in the northeast section of what is now Graham County. The unorganized county was attached to Rooks County for municipal purposes from the summer of 1879 to April 1, 1880, when it was organized by proclamation from Governor John P. St. John.

The county was named in honor of Captain John L. Graham of the Eighth Regiment, Kansas Infantry, who was killed in action at Chickamauga, Tennessee on September 19, 1863.

Graham County has two towns that were founded by or settled by two different ethnic groups. St. Peter was founded by Volga-Germans and Nicodemus was promoted for African-Americans to come and settle in a new land.

See below for a map that was featured in the thesis "The Nicodemus Colony of Graham County" written by William J. Belleau. 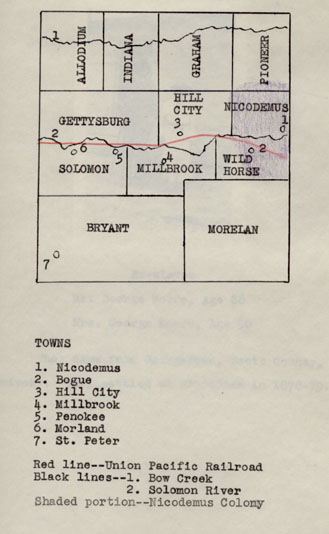 This was the first town site in Graham County. It was platted on April 5, 1879 and was located 8 miles north and 4 miles west of Hill City. George Higginbotham, the founder of the town, was one of the merchants, and a post office was established on January 16, 1879. After Mr. Higginbotham died and Roscoe lost its bid for the county seat, the town soon vanished. The post office moved to Hill City on August 15, 1893.

Located about 7 miles west of Hill City, Penokee had its beginnings as a town named Reford. The town site was platted on November 19, 1888 and when the post office was established on July 1, 1889, the name was changed to Penokee.

Settlers who founded this town were Volga-Germans who had settled in Herzog (Ellis County) in 1876. The area around Herzog was becoming more populated as the years went on, and land was becoming scarce. In 1894, a group consisting of nine families from Herzog found land in Graham County and on that land, a town called Hoganville was started.

Hoganville was named after the owner of the land purchased by the families. A community center and a frame church, St. Anthony's Church, were built. By 1898, it was abandoned and moved to St. Peter, which was founded on land donated by Mr. Peter Rome, a member of one of the original families. The church and other buildings, as well as the cemetery, were moved between the years of 1896 and 1898.

A new frame church was dedicated in the fall of 1910. It was 120 feet long and its tower was 120 feet high. It lasted until 1948 when it was dismantled because the Kansas winds caused it to start shifting. A new church building was dedicated on April 19, 1950 following construction that began in the spring of 1949.