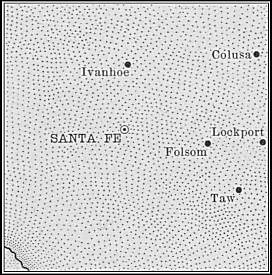 Named after the trail that passed through five miles north of the town site, Santa Fe was platted on July 31, 1886. At that time it was located in Finney County, which changed its boundaries in 1887, and Haskell County was established. Santa Fe was right in the center of the newly formed county. It was named the temporary county seat in July, and in November, the town won the permanent county seat after an election was held.

Both the Kansas, Texas and Southwestern Railroad and the Dodge City, Montezuma and Trinidad Railroad expressed interest in building a railroad to Santa Fe, but neither option worked out because they decided to build tracks south of the town. Santa Fe began to decline in the early 1900's after these two railroads decided not to build to the town, but its citizens still held out hope that another railroad would make plans to build tracks to town. After a third railroad, the Wichita Falls Railroad, had made plans to come but decided not to, an election was held on February 5, 1913 to determine the county seat. The choices were Santa Fe and Sublette. When Sublette did not receive the required three fifths of the vote, they took the matter to the Kansas Supreme Court which ruled in favor of Sublette.

Most of the citizens left Santa Fe during the next five years and moved to either Sublette, 7 miles south of Santa Fe, or Satanta, west of Sublette. The land that once was home to a town called Santa Fe is now being farmed.

Named for Dudley Chase Haskell, a U.S. Congressman from Lawrence, Kansas, Haskell County's first settlers began arriving in 1885. A small number of them were immigrants from England, Germany, and Ireland. The rest came from the eastern part of the midwestern United States, such as Illinois, Ohio, Iowa and Missouri.