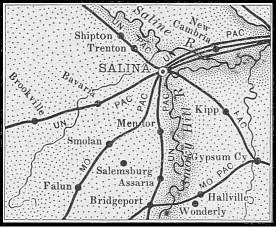 Settlers from Chicago bought a section of land for $3.50 an acre where Assaria now is. They first lived in a small, unheated wooden shed and brought water from a brook. Originally they belonged to the Salemsborg congregation, but in 1875 they organized their Assaria "God will help" congregation. This name became the name of the town. The first church building was built in 1877. The town site was laid in 1879. The Salina to Lindsborg Southern RR was constructed through Assaria. The town was incorporated and organized as a city of 3rd class in 1886.

The first Swedish immigrants settled in this area of the valley in 1868 and 1869. A group of 40 adults and several children arrived from Bishop Hill and Galva, Illinois in 1869. Their leader Eric Fors and his family had left Sweden in 185 and settled in Bishop Hill, Illinois. He served as a major in the Civil War. In 1871 the settlers organized the Falun Township, naming it after Fors' home in Sweden.

The Salina to Marquette Missouri Pacific RR made Falun a station in 1886. The Falun Lutheran Church was organized in 1887 and at one time served 300 people. Much of the property of the Falun area was absorbed into Camp Phillips during World War II.

In February, 1869 a large group from Galesburg and Swedonia arrived and settled in the Salemsborg community. By Spring 1870 all the available land in the area was taken. In September 1869 the Salemsborg Lutheran Church was established which served the local and surrounding farming area.

After careful planning, four men led by Col. William A. Phillips founded Salina on the Smoky Hill River in 1857. The town motto was to be "Religion First, Education Second and Business Third."

Swedish settlers coming to the Smoky Hill River Valley in 1868 and 1869 passed through Salina. Many stayed. In 1870 they organized The Swedish Lutheran Church of Salina. Col. Phillips gave the congregation land to build their church building. There were 103 members and communicant members in the first congregation.

Salina grew as a wheat milling and railroad center and became the county seat of Saline County. It survived the growth and the closing of the Smoky Hill Air Force Base during and after World War II.