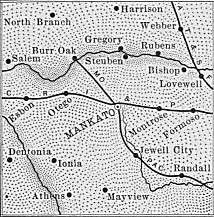 Winsor, M. and James A. Scarbrough. “History of Jewell County, Kansas with a full account of the early settlements, and the Indian atrocities committed within its borders.” Jewell City, KS: “Diamond” Printing Office, 1878.

Burr Oak Township was originally White Rock Township which was organized August 22, 1870. The town site of Burr Oak was laid in May 1872. By 1878, the town has two general stores, one drug store, a mill, and two hotels.

Esbon is the name of the post office located in Limestone Township.

Holmwood was located on White Rock Creek in Holmwood Township.

Located in Ionia Township near the middle forks of Limestone Creek, Ionia contained two general stores, a blacksmith shop and a boot and shoe shop in 1878.

The town site of Jewell City was filed on May 6, 1870, and the Jewell City Town Company was organized on May 28.

Jewell County was officially organized in 1870, and the current county seat is Mankato. The county was named Jewell County to honor Lieutenant-Colonel Lewis R. Jewell, a member of the Sixth Kansas Cavalry. This county is located along the Kansas-Nebraska border and is approximately 150 miles from the Missouri River.

The first settlers in Jewell County were William Harshberger and his wife, as well as A. Clark and his wife.

The rumored history of Jewell County is particularly bloody. The Sioux and the Pawnee tribes fought a gruesome battle outside of an early settlement, leaving the warriors of the Pawnee tribe dead. Several massacres followed. One notable occurrence was in the spring of 1867 when some members from the Cheyenne tribe started a massacre that killed many of the residents. Any survivors of this massacre left the settlement, threatening to wipe it off the map.

Shortly after the county was organized on July 14, 1870, plans were made to have an election for the county seat. Jewell City was named the county seat on September 27, 1870 after winning the election over an imaginary town called “Springdale”.

However, Jewell City relocated the county seat to their town in 1875, prompting another election that was held June 28, 1875. The result was a majority vote by 206 votes to move the county seat back to Jewell Centre. This was the last election held on where the county seat was to be in Jewell County.

Swedes, Norwegians and Scandinavians settled in Republic County, and some of their people extended their settlement into Jewell County.

The only town in the Vicksburg Township, Omio was founded in 1877. A year later, it had a post office, two general stores and two blacksmith shops.

Located in Richland Township, Rubens has a general store, a post office, a blacksmith and wagon maker’s shop in 1878.