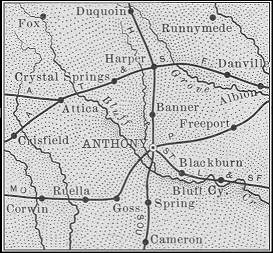 A town company located the site for a new town on April 6, 1878. The first buildings put up by the Town Company included barracks for emigrants. Soon there was a general merchandise store, a drug store, and a hardware store. The town was incorporated in 1879. The post office was established on June 14, 1878.

In June 1884, the Arkansas Valley Town Company purchased the land on which the town site of Attica now stands. The land had been part of the "Osage Trust Land" which allowed settlers to pre-empt it , and the money went to the Indians.

The town site was platted on July 9, 1884, but there is record of a survey being done in July 1885, so the date of platting the town has been questioned.

The Atchison, Topeka and Santa Fe Railroad built their tracks to Attica in 1884 or 1885, and the town began growing. By February 1885, there were 1500 residents. It also became the terminus of the railroad, and many new businesses were built, as well.

However, when the Cherokee Strip was opened, the town decline rapidly after most of its buildings were moved. People who stayed in Attica managed through some rough times and soon the town began to grow and prosper once again.

The town site was platted on November 20, 1886, and by the end of December, there were 200 families in residence. The railroad built a roundhouse and shops which later were moved to Anthony. Once the Cherokee Strip opened and the buildings were moved, the town's decline was imminent.

Originally named Coleville in honor of Mrs. E. J. Cole who had laid out the town in 1880, the name of Danville was given to the Coleville post office on January 25, 1882. A group of people from Danville, Ohio, had settled in the area in 1880. They were of French heritage and practiced the Roman Catholic faith. When the town company purchased twelve acres from Mrs. Cole, they changed the name to Danville in honor of their former home.

About three miles southeast of the present site of Freeport, a trading post and a post office were being operated by B. H. Freeman in 1878. The Midlothian post office was established on April 19, 1878.

The St. Louis, Fort Scott and Wichita Railroad had built tracks to Anthony in 1885, and shortly afterwards, Mr. Freeman moved his post office to the present site of Freeport.

The town site was platted on February 27, 1885, and eight days later, Midlothian was platted. The towns were side by side and divided by Grand Avenue, a north-south street.

The depot was built on Main Street of Freeport, and the towns eventually became hostile to each other. However, the two towns came to good terms and on March 18, 1886, the Freeport Tribune had written that the differences had been settled. Midlothian became known as West Freeport. Freeport became an incorporated city on October 12, 1887, and it became a boom town. There were 300 residents in 1887, and by 1892, the population was between 700 and 1000.

When the Cherokee Strip opened on September 16, 1893, the decline of the town began. The 1895 Census shows that the population was only 54. To this day, it is known as the smallest incorporated city in the state.

Created by the legislature in 1868, Harper County lands were part of the "Osage Trust Lands" that the Osage Indians had received from a treaty in 1825.

Several men from eastern Kansas and western Missouri used fraud when petitioning for the organization of the county in 1873. They made up names or consulted city directories to get the required number of residents, and they used buffalo bones laid out as houses. The petition, dated July 13, 1873, also asked that Bluff City be named the temporary county seat. By law, the governor had to declare that Harper County was organized, and he did so on August 20, 1973. However, this was legal only on paper, and in 1878, the county was organized legally and officers were appointed.

An investigation into the fraud began in September 1884 in which it was found "that there never have been forty bona fide inhabitants in Harper County; that gross and inexcusable frauds have been practiced by those who engaged in planning and procuring the organization of said county,... and that the names as reported by said census takers are forgeries". (page 29 of "The Harper County Story").

The M. Devoure family were the first settlers in the county; they made their residence on Bluff Creek early in 1876.

Several families from Iowa located the town site on April 14, 1877. A town company was formed, and soon Harper was growing with new residents moving in and businesses being set up. The first post office in the county was established here on July 1, 1877. The first newspaper was started on October 24, 1878 - it was called the Harper County Times. The town became organized on September 7, 1880.

The Mennonites established a church in 1888 after arriving in 1883 from Harvey County, Kansas and Wayne County, Ohio.

Located nine and one-half miles northeast of Harper, the town of Runnymede was founded by an Englishman for the purpose of creating a colony that consisted of wealthy young Englishmen. Francis J. S. Turnley came to the area from England around 1880. He advertised for young men to come to "a western paradise where golden birds sang in the trees and silver rivers ran tinkling to the sea". (pg. 139 of The Harper County Story.)

There were two other communities in Kansas that were doing the same set up -enticing men to come from England and learn how to farm. Studley (Sheridan County) advertised for the middle-class, while Victoria (Ellis County) and Runnymede wanted the sons of well-to-do English families. In the cases of both Runnymede and Victoria, these men became known as "Remittance Men" because they would receive a monthly remittance from their families. The British brought their fun-loving and free-wheeling nature to the Kansas prairies and never really participated in the one thing that they were supposed to learn - farming.

Mr. Turnley purchased 1700 acres and started a ranch called Chikaskia Ranch, which was named for the river that was close by. Another gentleman name Robert W. Watmough was the one who came up with the idea of starting a town. The town was laid out, businesses and residential properties lined up, and by January 1889, there was a store. Their plans came to fruition when the first boatload of English people, sixteen men and women (two of whom were Turnley's sisters) left England on May 29, 1889. By 1890, a church and a hotel called the Runnymede Arms had been built. The peak population was between 100 and 200.

Then came tragedy... Mr. Watmough was a guest of honor at a ball held at the hotel the night before he was to leave to return to Ireland. He was going to be married to Hilda Turnley, who had already returned to their home country. A fire in the community barn that night, May 14, 1890, killed him, and that was the beginning of the end for the town of Runnymede. By 1895, it was virtually empty, as all the buildings had been moved away and their occupants had moved back to England or to Harper.

The plat for this town site was filed on September 29, 1880. The town site was located about 14 miles southwest of Anthony. Both the Chicago, Rock Island & Pacific and the Kansas City, Mexico & Orient railroads came through the town.