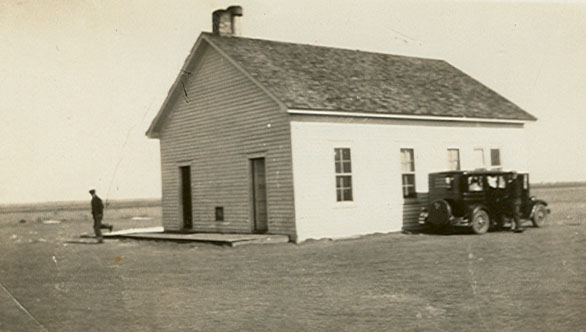 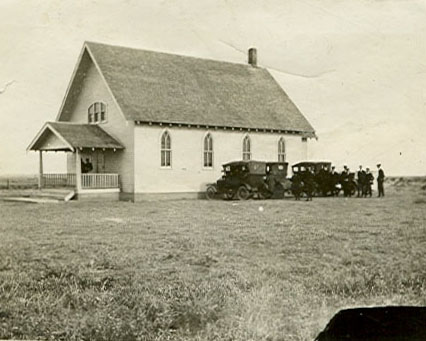 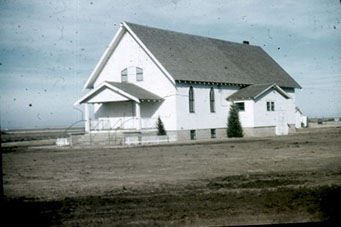 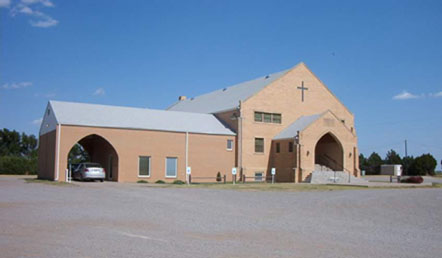 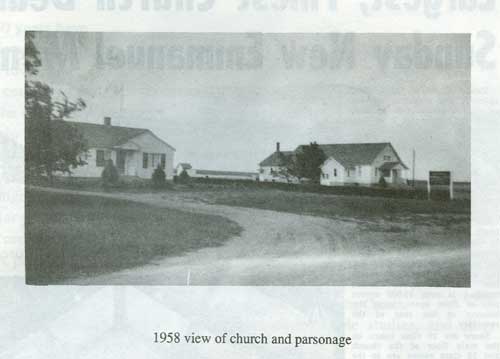 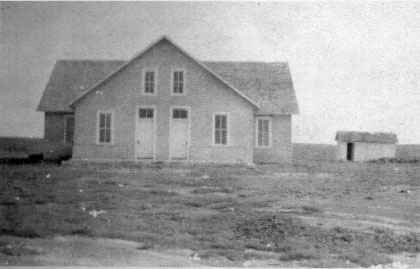 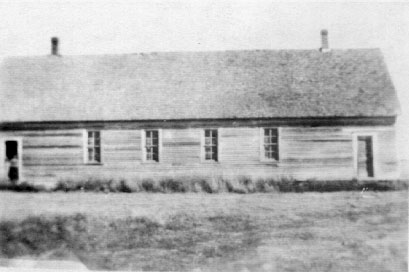 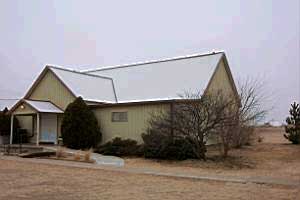 The earliest Mennonite settlers arrived in Meade County in 1906. These settlers were members of the Kleine Gemeinde Church. They were part of a rather large group of immigrants who came from the steppes of the Ukraine to North America in 1874 and 1875, seeking religious freedom and finding a welcome in the United States and Canada. German was their first language and the "plautdietsch" or Low German served as their "everyday" language. Those who settled in Meade County had settled first in the area around Jansen and Fairbury, Nebraska. As their families grew and land became scarce, they began to look for alternatives. Martin T. Doerksen from Inman, Kansas, a land agent, was influential in bringing the new settlers to Meade County from Nebraska. The first families arrived in 1906 and others soon followed. They came to Meade County when it was open prairie. There were no roads, and cattle from the ranches had free range. Cattlemen, seeing that they would have to give up the free range, did not offer encouragement. Others had attempted to settle this area, but none had been successful.

In 1907 people began to move in larger groups, and soon most of the Kleine Gemeinde congregation from Jansen, Nebraska, had been transplanted. They came by train and chose to settle first in an area about twenty miles southeast of the town of Meade. This part of Meade County was known for years as the "darp" or settlement. About a dozen new Mennonite settlers purchased about six sections on April 27, 1907 from C. R. Fullington and George Theis, with Martin Doerksen's assistance. The shaded area on the map below identifies these original six sections. Mr. Doerksen gave his one quarter section of ground at Inman, Kansas as a down payment for his land in Meade County. As more families moved into this community, it expanded. Church families were spread out to the extent that the Kleine Gemeinde congregation eventually built two church buildings, one in the "darp" and the other farther north.

Other Mennonites also moved into the county, some arriving as early as 1907. This group also had roots in South Russia and most of them were members of the General Conference Mennonite Church. Many of them came from families that had originally settled in Central Kansas, and many had relatives in the Kleine Gemeinde congregation. They also spoke German and Plautdietsch, but were generally more liberal both in theology and practice than their Kleine Gemeinde neighbors. They settled on farms southeast of Meade, and as the community expanded it stretched from north to south for more than twenty miles. Churches and schools were organized. The Pleasant Hill School district was formed in 1908 and this building was also used as a church building until 1921. The church was organized in 1910 and named Bruderthal. In 1936 they changed the name to Evangelical Mennonite Brethren. Another General Conference group formed a church known as the Nebo Church in 1917 and these two congregations merged in 1930.

The Kleine Gemeinde congregation dissolved in 1942/43 and the south church was closed. In 1949 this building was moved to the Meade Bible Academy campus. In 1968 Meade County 4-H Club members raised $1000 to pay the expenses of moving the building to the Meade County Fairgrounds. Services were continued in the north church, and those who worshiped there formed the Emmanuel Mennonite Church in 1944. This building was remodeled and served the congregation for many years until they moved into a new brick building in the city of Meade in 1966. This church is not affiliated with any conference.

True to their traditions, these Mennonites lived a rather exclusive lifestyle. For many years they pretty much controlled the district schools, and had their own high school, the Meade Bible Academy. School consolidation took its toll in the 1950's and '60's, and the country schools that dotted the landscape closed one by one. The Mennonite children became integrated into the Meade public schools and the Academy closed in August of 1966. The number of Mennonite farmsteads has decreased and people of non-Mennonite background occupy many of those that remain. The early settlers were truly pioneers. They found ways to tame the prairie, and their determination to persevere resulted in a measure of prosperity for many of them. Some chose to leave the community during the depression years, moving west to California and Oregon. Many of the descendants of the original settlers still reside in Meade County, and their contribution to the community honors the legacy of these brave pioneers. 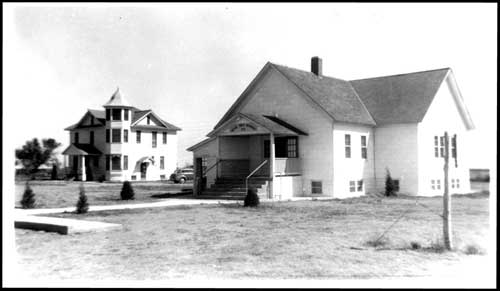 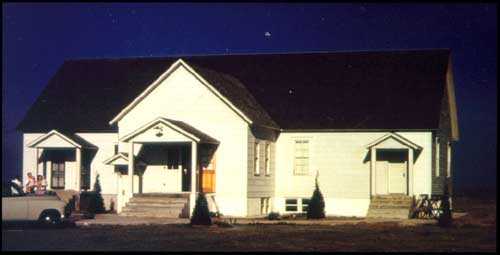 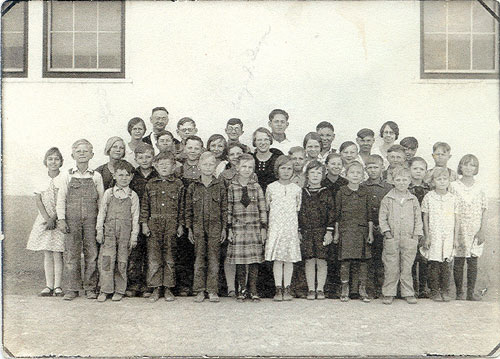 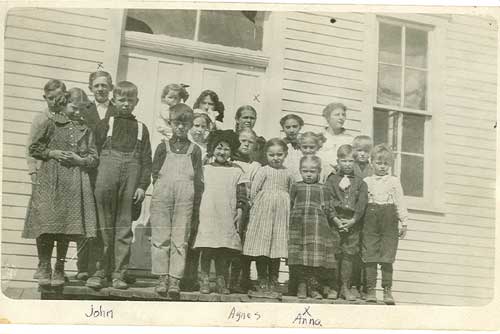 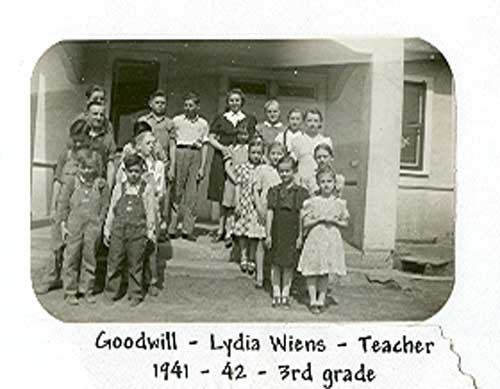 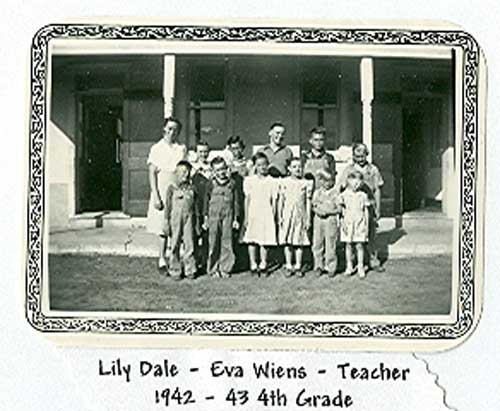 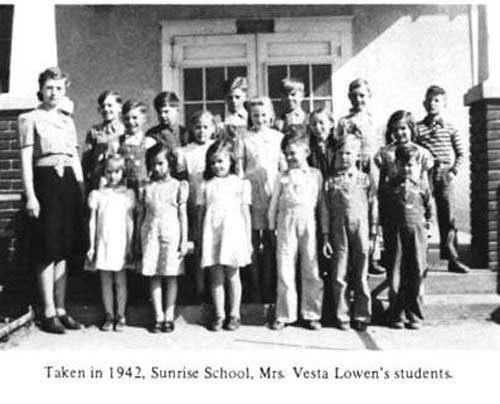 Meade Sunrise School in 1942 located on Rd 20 S Rd
NOTE: The teacher's name is misspelled in above caption - it should be Mrs. Vesta Loewen