The town site was platted on June 2, 1886, by the Arkansas Valley Town and Land Company. It was located on a homestead that was filed by Henry McKibben in 1879. Belpre was named after the McKibben's former home in Ohio, and it means beautiful prairie. The post office was established in 1879.

Founded as Petersburg by a Chicago man, Dr. Samuel Rodgers, in 1872, this town site was in Pawnee County at the time. The railroad had built tracks to the present site of Kinsley by August 1, 1872. Meanwhile, a F. C. Hawkins was appointed to take the census for the purpose of organizing Pawnee County.

Hawkins had men on an immigrant train sign a petition stating that they were legal electors living in Pawnee County - the petition had to have 40 names, and there were not enough legal electors actually living in the county. Then Hawkins had to find 600 residents and he reported having counted 674. Dr. Rodgers reported the fraudulent count to Topeka, but the legislature and the governor ignored him and organized Pawnee County regardless of the report.

Dr. Rodgers continued to work on improvements in Petersburg. A telegraph office and a hotel called the Buffalo Hotel were established during the first few months of 1873. When Dr. Rodgers was not around, Booth, a supporter of Larned, had gotten to the legislature and they passed a bill that changed the boundaries of Pawnee County. The main purpose was to remove the southern townships which would place Larned at the center of the county. This left Petersburg and Garfield out; eventually Garfield was restored to Pawnee County, but the thirteen other townships were left without a county.

Efforts to begin a new county started in mid-1874. The first census showed only 301 residents in May, but the people asked for another census to be taken. In August, the second census showed 633 residents.

Meanwhile, the town of Petersburg was undergoing a name change. By the end of 1873, it had changed its name to Kinsley after Mr. Edward W. Kinsley of Boston. Mr. Kinsley had been a promoter of the town for the New England Homestead and Colonization Bureau which had joined forces with Dr. Samuel Rodgers.

Situated on land that was purchased by the Lewis family in January 1882, Lewis was a latecomer to the county. Jane W. Lewis had the northwest quarter of her land conveyed to the Lewis Town Company, and the section was platted on May 22, 1886.

The town was started by the Santa Fe Railroad in 1872 and was named for an official of the railroad, Mr. Nettleton. John Fitch, from Chicago, wanted to establish a plantation in Kansas, so he purchased some land in the northeast edge of the county which included the settlement of Nettleton. The name was changed to Fitchburg, and the Fitch home was probably the first of its kind in Western Kansas with plumbing and other conveniences.

Mr. Fitch constructed a flour mill which was operated by steam power and windmills. However, beginning in 1874 the area went through several years of hard times with the grasshopper plague and the drought. Mr. Fitch lost his fortune and eventually lost his life in a farming accident in 1877. Shortly thereafter, his baby died, and a few weeks later, Mrs. Fitch died. All three graves were on the front lawn of their magnificent home.

Organized in 1874, Edwards County was named in honor of W. C. and R. E. Edwards who were among the county's first settlers. The Edwards constructed the county's first brick building, a building that served as the courthouse for several years.

The county attracted German and Swedish settlers. The county has a large population of Germans. The Catholic Germans settled mainly northwest of Kinsley in the area of the St. Peter and Paul Catholic Church. German Methodists also settled in this part of the county where they established the Salem Methodist Church. South of Offerle there are German Lutherans, who established the Zion Lutheran Church. In the northeast part of the county near the Pawnee County boundary was a group of Swedish settlers. This group had close ties to Garfield and helped establish the Lutheran church there. 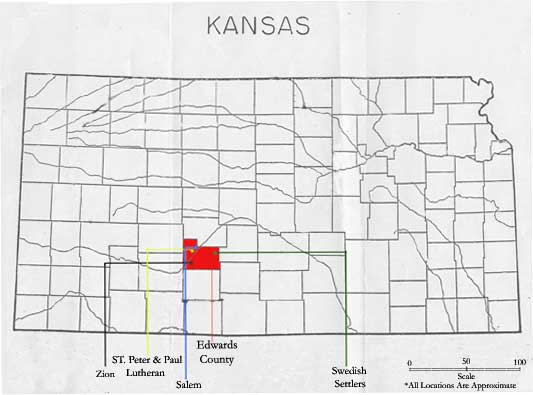 Rosetta Graff of the Edwards County Historical Society supplied most of the information on this page.

William G. Culter's History of the State of Kansas (1976 reproduction).

During the late 1870's, Philip Ott, Lawrence Offerle and John Offerle purchased Section 7 from the railroad company, and each of them deeded 40 acres of each quarter section to the Offerle Town Company. The town site was platted on December 4, 1877.

Founded in 1883 by the Millette family, Wendell was platted on June 20, 1885. The Wendell Town Company encouraged people to come to Wendell by offering 25 foot lots. The town grew rapidly, and its citizens had high hopes of it becoming the county seat. The county's boundaries extended to the south and east of the present day boundaries, so Wendell would have been centrally located.

A post office and a store were opened by Fred Millette, and other businesses soon followed.

There was a petition filed in 1885 to change the county seat from Kinsley to Wendell. There was some stuffing of the ballot boxes in favor of Kinsley, and that town was declared the winner. Because Wendell lost the county seat, the railroad broke its promise to build tracks through Wendell and routed them through Greensburg instead. Even though Wendell had some businesses and two churches and was the headquarters for the Cannonball Stage Line, the citizens gradually moved away and Wendell ceased to exist by the early 1900's.