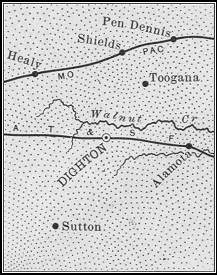 The county's first post office founded on September 10, 1877, Altamota was most likely named for the bluffs of white limestone along Walnut Creek. White Rock is the Indian name for Altamota.

By 1880, there was a general store, a drugstore and saloon, and a blacksmith. The post office was moved to school land northeast of the original town site in 1885. A new town was platted and was named Altamota, and it is one of the surviving towns in the county.

Originally named Ellen after a homesteader's wife, Ellen Patterson, the town site was founded along the Santa Fe rail line in 1887. Platted on July 22, 1887, it did not have much of anything through 1905; only a house and a sign with the name on a post.

Later in 1905, an elevator run by the Moses Brothers was opened, and other businesses started coming in. A post office was established in 1906, and the name had to be changed because there was another post office with the name of Ellen in Kansas. The Post Office chose Amy from a list that was submitted to them. Amy was the name of a daughter of one of the residents, J. R. Bruner.

Founded as a post office on May 9, 1879, California was also called Bell Town after Edwin J. Bell, the founder. It was his claim that became the site for the new town. Residents also called it Lane Center when it was a good option for the county seat. By March 1880, California had a couple of general stores, a livery barn, and the California House.

The town site was surveyed in April 1880, and Captain P. W. Hey gave it a new name, Gould City. The post office remained with the name of California. Because of the lack of business in town due to the low profits, if any, of the surrounding farmers, the two general stores had closed by March 1882. Mr. Bell sold his claim which included the platted land. This pretty much decided the fate of the town which lasted all of three years.

The town site was founded in 1878 by four men from Great Bend, Kansas, who brought with them a surveyor from Rush County to help them find their land. A post office was established on March 26, 1879, and it was named Deighton, after the surveyor, Richard Deighton, who returned to his home and did not settle in Lane County. The name change to Dighton is attributed to the first issue of the Lane County Herald, printed on May 1, 1885 with "Watson, Dighton Po., Kansas" in the masthead. The editor never explained the change.

William A. Watson, a Methodist minister, arrived in the area in the spring of 1880, and in July 1881, he platted 40 acres of his quarter. He named the town after himself: Watson. He later purchased a homestead in 1885 in the northwest quarter of the town and platted 40 acres with the name of Watson's Addition. John Schiereck platted Schiereck's Addition to Watson in May 1885, and Ed Walker platted Walker's Addition to Watson a little bit later.

A group of people from Wichita came to Watson in late 1885 and established a town named Dighton on Schiereck's quarter. When the county was organized in 1886, both Dighton and Watson wanted the county seat. Watson was selected, but its name was changed to Dighton. By 1887, the population was 560, and there was also a financial boom at a time when many western Kansas towns were also experiencing boom times. Dighton continued to progress and with its standing as the county seat was and continues to be the largest town in Lane County.

Created by the Kansas Legislature in 1873, Lane County's boundaries changed three times - in 1879, 1881 and 1883. Governor Martin organized Lane County on June 3, 1886 and Dighton was named the temporary county seat. Lane County was named after Senator James H. Lane who was a free-stater.

In 1880, forty-two pioneers living in the county were born in other countries - 12 in England, 7 in Ireland, 7 in Prussia, 5 in Canada and 2 in Sweden. 6 were born in either Germany or the German states. One stated he was born in Pomerania which could be either Germany, Poland or the Russian Empire. There was also a Norwegian born settler and a Scottish settler. By far, though, the majority of the settlers came from other states in the United States of America.

The last town set up along the Missouri Pacific Railroad in the county was platted on August 20, 1887. Named for an official of the railroad, its post office was established on August 29, 1887. Healy soon became a bustling town with a general store, a boarding house, and a blacksmith shop among its businesses. By 1910, Healy's population was 174. It remains a vital part of Lane County today.

John V. Moffitt, president of the Memphis and Denver Town Company, founded this town site which was platted on August 17, 1887. Richard Shields, a homesteader southeast of the platted land, was the namesake for the new town. On December 22, 1887, a post office was established. A church and a school were built soon after, and in the 1890's, Shields had the Cottage Hotel and a general store. By 1910, its population was forty-eight.

Founded in 1879 by Bernard McCormick, but it lasted only a few years. The McCormicks left in May 1881 to go back to Waterloo, Iowa, and even though a valiant effort was made by Captain Hey to keep the town going, it was abandoned in the late 1880's.