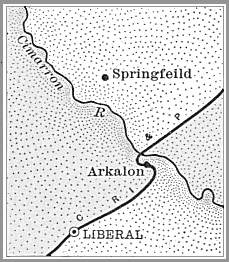 The town site was platted by the Arkalon Town Company on May 10, 1888, one day after a post office called Arkalon had been established. Many of its settlers moved here from Fargo Springs and Springfield. However, the town was in an area of hills and had deep sand which caused many problems for getting supplies into and out of town. Despite the unforgiving ground, Arkalon was a vital shipping area for close to twenty years. It was the flood of 1914 that doomed the existence of the Arkalon because it wiped out a bridge that lead to the town over the Cimarron River. Shortly after this happened, the Chicago, Rock Island and Pacific Railroad moved its operations to Liberal. By 1920, there were few people remaining in the town, as many of them had left and moved to Liberal. The post office closed in 1929.

The first town in Seward County, Fargo Springs was named for C. H. Fargo, owner of a boot and shoe house in Chicago. Mr. Fargo owned land in the area of Seward County. There were several springs southwest of the town, hence the name Fargo Springs. It was also known as the "Springs". The town site was surveyed on May 20, 1885 by the Southwestern Land and Town Company.

Seward County's first election was held on August 5, 1886 for the county seat. Fargo Springs won over Springfield, a town 3 miles north of the "Springs". Springfield's citizens were bitter about the loss, and another election was held in November 1887 which was once again won by Fargo Springs. Like other county seat wars in Western Kansas, this one went to the Kansas Supreme Court 10 months later; the court ruled in favor of Springfield

Eventually it came down to the railroad deciding the fate of these two bitter rivals. The Kansas Southern Railroad (later known as the Rock Island) had originally planned to build their tracks westward and either town could have become an important railroad town. Instead, the railroad built the tracks southwest to Liberal, probably because of the county seat war.

Fargo Springs was abandoned about a year after the railroad made its decision.

A post office was established on June 14, 1886, a mile west of the present site, and a store and a school were built within a few months. After the Rock Island railroad came to the area, the town was moved one mile east and was platted by the Kansas Town and Land Company in April 1888. The town was named after a saying that folks would say when S. S. Rogers, a rancher, offered them free water - "well, that's right liberal".

Because of its location on the railroad, Liberal became a major trading and shipping point and it grew rapidly. Its citizens wanted the county seat, and in the last election held for the county seat in 1892, Liberal was the winner.

Established on March 20, 1873, Seward County went through several boundary changes. It was expanded on February 22, 1883, to include Kansas (now Morton), Stevens and part of Meade Counties. On March 13, 1885, Meade County was re-established, then on February 20, 1886, Morton and Stevens Counties were re-established. The name of the county was in honor of William H. Seward, a senator from New York and a leader of the anti-slavery wing of the Whig Party.

Many of the early settlers arrived in Seward County after traveling from their former homes in the eastern and midwestern states. Some were of Irish, German and English descents.

This town site was chartered on September 18, 1885, and platted the following spring. Located just north of Fargo Springs, Springfield soon became a bustling town with a school, two hotels, and businesses that were placed around the public square. Many of its first residents moved here from Carthage, a town in Meade County that was abandoned in the spring of 1886.

Governor John Martin named Springfield the temporary county seat in June 1886. However, Fargo Springs wanted the county seat, which set things in motion for what was eventually a six year county seat war.

Commissioners arranged an election that was held on August 5, 1886 to determine which town would be the county seat. The election board was in a closed-off room in a building in Fargo Springs, and the ballots were passed from the outside through a raised window. The Springfield folks didn't like that method, so a wagon with a soapbox was put in front of the voting place. They placed their ballots in the soap box, but the next day those ballots were not counted when the county commissioners met to canvass the votes. Only the ballots cast through the window were claimed to be legal.

The citizens of Springfield took the case to the Kansas Supreme Court and after ten months of litigation, the court declared that the "soapbox" ballots were the legal ones. Springfield won the right to be the county seat.

Even though the county seat war appeared to end peacefully, there was still bitterness in Springfield because of the county seat conflict and court decisions in Seward and its neighboring counties. On February 18, 1888, suits were filed in the Kansas Supreme Court against Seward County officials allegedly involved in fraudulent claims, receiving bribes, and robbing the people of the county.

In neighboring Stevens County, the bitter county seat war between Hugoton and Woodsdale had resulted in dissenting factions, as well. Theodosious Botkin was a district judge who had been involved in a lot of disputes in southwest Kansas. In Seward County, his rulings had been primarily in the favor of Fargo Springs which made some Springfield citizens so angry that they plotted to ambush and kill him in January 1892.

However, one of the plotters told the undersheriff, H. P. Larrabee, a few hours before the plot was to be carried out in the early morning hours of January 3rd. Sheriff Samuel Dunn and six other men left Springfield the night before and walked to the Cimarron canyons where they waited for the would-be assassins near where the plot was going to take place. When the men who had planned the assassination and interested bystanders came to the area several hours later, the sheriff told one group to disperse and leave. The rest of the sheriff's group went to warn the judge, and they came upon the second group of troublemakers. When one of the sheriff's men, Sid Nixon, turned and began to run after a period of shouting between the group and the sheriff's men, the gang started firing. The men who were still talking to Sheriff Dunn heard the shooting and fired upon the sheriff who was fatally wounded. No one was ever convicted for the murder of Sheriff Dunn.

In 1887, the county commissioners purchased $100,000 in stock in the Kansas Southern Railroad, using bonds that were voted for the purpose of getting a railroad to the town. However, the railroad bypassed Springfield and built its tracks to Liberal. The end result was a decline in the businesses of the town, and by 1893, the county seat was moved to Liberal. There are no buildings of the town remaining today.