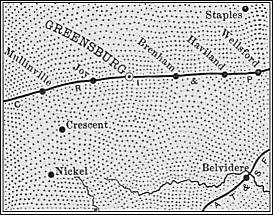 Early day settlers and ranchers Watson and Fullington founded the town which was named "Belvedere" by their wives after an Italian word that meant beautiful view. Platted on April 7, 1888 by C. P. and J. B. Fullington, the town had a population of 45 in 1891, and by 1900 it had grown to 75 people.

The Santa Fe Railroad laid tracks through Belvidere on October 1, 1887.

The Crescent Post Office was established on May 27, 1892, in the W. H. Hargadine home amidst a thriving community known as the Bethel/Crescent community. It already had a school and a church. The post office was discontinued on September 14, 1905.

The names of Bethel and Crescent were both used to call this community located in the west central section of the county.

Founded on a section meant for a school, Greensburg was laid out by the Greensburg Town Company in either 1884 or 1885. A town site two miles to the west, Janesville, had been laid out by Jacob Barney in 1884. "Cannonball" Green, a member of the Greensburg Town Company, told the citizens of Janesville that if they moved to Greensburg they could get the title to their land a year earlier. Janesville ceased to exist and Greensburg organized its town site on June 18, 1886. It was named for a pioneer stage coach driver "Cannonball" Green.

The Chicago, Kansas & Nebraska Railroad constructed a track to Greensburg in 1887.

90% to 95% of the town of Greensburg was destroyed by an EF5 tornado on May 4, 2007. The residents are rebuilding the town and have made much progress using the new "Green" materials.

Kiowa County was formed in 1867 by the Kansas Legislature from land that had been ceded to the U.S. government by the Osage Indians. It was a county in name only at that point in time because there were less than 600 people living in the county.

Due to the Comanche Pool, a huge cattle corporation which had a big interest in the land, the Legislature made the northern half part of Edwards County and the southern half part of Comanche County in 1874. However, the number of settlers coming into the county brought about the downfall of the Comanche Pool, and in 1886, the Legislature organized Kiowa County.

Quakers founded the town of Haviland in 1886.

The town was founded by Quakers and named for Laura Haviland who was very active in starting schools for indigent children. She was also active in helping fugitive slaves during the Civil War. Mrs. Haviland was never a resident of the town named after her.

The 30 acre plot of land that eventually became home to the town site was donated by R. D. Woodward, A. K. Kemp and John Falter. The Haviland Town Company was formed in May 1886, and a charter was filed on July 12, 1886.

Both the Santa Fe and the Rock Island Railroads built tracks through Haviland in 1887. The Santa Fe Railroad tore up its tracks and station some years later, much to the dismay of the citizens of the town. The post office was established in June 1886. The Friends built Haviland Academy in 1892 which eventually became what is now Barclay College.

Founded in 1884 by Alfred A. Mullin, Mullinville already had several settlers in the area. Washington Kennedy, an Indian scout, and five other men had come to the area from Kansas City, Kansas in 1875. Three years later, in April 1878, a company of six wagon trains came to the area and began raising sheep.

A few days after Mr. Mullin founded the town, people were moving to the new town site. He built the first store which also served as a post office. Both the Santa Fe and Rock Island Railroad built tracks to Mullinville in October 1887.

Founded by C. P. Wellsford after he moved the Dowell, Kansas post office to the new site in 1884. Named after Mr. Wellsford, the town became a frequent stop on the route of the Cannonball Express stagecoach.

At one time, Wellsford was a thriving community with livery stables, general stores, a drug store, elevators, and a bank. It also had both the Rock Island and Santa Fe Railroad running along parallel tracks. There were as many as seven different newspapers that set up shop at different times in town, and there were also seven livery stables during its prime.

As the railroad moved west and other towns were built along the rail line, Wellsford began to decline. Greensburg became the trade center. By the 1910, the population was only 100, and in 1955, the post office was closed.