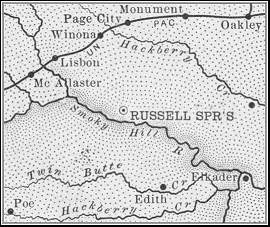 Logan County, originally called St. John County, sits between Wallace County and Gove County. This county also shares borders with Thomas County, Wichita County, Scott County, and even part of Sheridan County. After a dispute with Russell Springs in the 1960s, Oakley, Kansas, became and still is the location of the county seat. This county is home to the Fick Fossil and History Museum in Oakley, Kansas, and part of the Smoky Hill Trail the ended in Russell Springs, Kansas.

The Smoky Hill Trail is critical to the formation of Logan County. This trail, along the Smoky River, provided a route to Fort Wallace and then on west toward California. The trail passed through three stage lines: The Butterfield Overland Dispatch, Overland Express, and Wells Fargo. The Eaton Station, a stop along the Butterfield Overland Dispatch, is now Russell Springs, Kansas. Russell Springs was named after rancher William Russell. The Union Pacific Railroad was also crucial in the county’s formation. With western railroad expansion, came the need for two new counties to be formed. The counties of Wallace (present-day Wallace and Logan) and Gove were formed.

Originally, Wallace County included both present-day Logan and Wallace Counties, until 1881 when a bill was passed that divided this area into two counties. Wallace County remained but the eastern half became known as St. John County, named after Governor John P. St. John, which later became Logan County. In 1887, St. John County was officially renamed Logan County, in honor of the late General John A. Logan. The name change came about because Governor St. John had lost favor with the Republican Party after he left it to become the leader of the Prohibitionists.