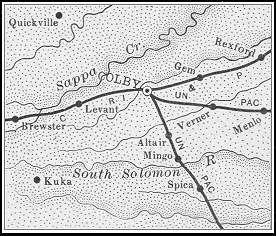 Named for Robert Brewster, a railroad foreman who helped to lay track, this town became a station on the Chicago, Kansas & Nebraska Railroad in August 1888. Hastings, a settlement two miles north of Brewster, had plans to build a city on the proposed Union Pacific Railroad, but when the railroad's plans were abandoned, the town site moved to Brewster.

J. R. Colby homesteaded near the geographical center of the county in 1882. It was located 3 miles south of the present site of Colby. In 1884, Mr. Colby got a patent for his town and started a post office. However, before he could carry out his plans for a town, the Colby Town site Company recorded a plan for a town 3 miles north of the Colby homestead and worked out a compromise with Mr. Colby in March 1885. Mr. Colby received a business lot and a location for his house, as well as being the namesake of the new town.

A county government was established on October 8, 1885, and Colby was named the county seat. The first court house was a two-story, thirty feet square structure which was built after funds were raised by private donations and it opened for business on July 15, 1886. The courthouse shown below was built in 1907. 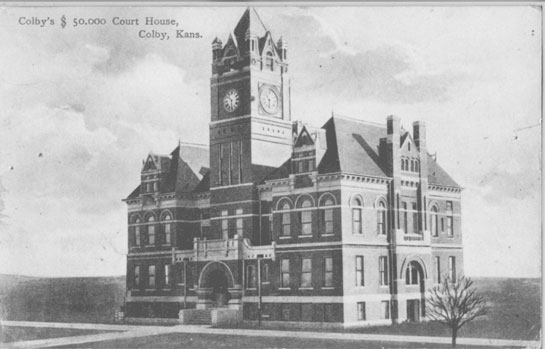 Named for J. W. Ellsworth's Gem Ranch which was a stop on the right-of-way of the Chicago, Kansas & Nebraska Railroad. The town was organized in the summer of 1887 and was close by the Reed homestead. The Reed family were the first settlers of the county.

Originally named Verner by the Union Pacific Railroad, it was settled in 1885 when settlers came to homestead. It is now a ghost town.

The town site was staked out in 1888 by Steven Waters who had come to the area in 1885 and took out a homestead. The Chicago, Kansas and Nebraska Railroad laid tracks through the area in 1887.

Thomas County was one of twenty-nine counties whose boundaries were defined by the Kansas Legislature on March 7, 1873. After Sheridan County (on the eastern border) was organized, Thomas County was attached to it for judicial purposes. Plans for organizing the county began in 1885, and by the fall of that year, Thomas County was officially a county.

Members of the Andrew Reed family were the first settlers in Thomas County; they came from Dubuque County, Iowa in 1879.

Immigrants to Thomas County came from the European countries, as well as Americans from the eastern part of the country. The recruitment of the railroads and the policies that provided free land were the attractions that brought the settlers to this area. There was not a settlement established by any nationality group. However, people of Irish, Polish, Danish and Swedish descent settled in the northwest part of the county, Mennonites settled in the southeast part, and Germans settled in the central and southwest.

The railroad played a big part in the formation of the towns in Thomas County. By 1887, three railroads were making plans to build their tracks within the county. Union Pacific Railroad built a branch line from Oakley, in Logan County, to Colby in 1887 and went as far as one mile west of Colby, intending to take it into Colorado. In the meantime, the Chicago, Kansas and Nebraska Railroad, later known as the Rock Island Railroad, had laid tracks as far as Norton in Norton County. Unless the people of Thomas County would pay them $60,000, the C. K. & N. Railroad was going to stop at Norton. Thomas County held a bond election which passed and thus provided the funds for the track to be laid to Colby. It was finished in 1888 and the railroad built tracks westward through the county. It was along these tracks that the C. K. & N. Railroad built depots which eventually became the towns of Rexford, Gem, Levant and Brewster. The third railroad that built tracks into Thomas County was the Lincoln and Colorado line being laid eastward to connect with a track being built west from Salina. The Union Pacific established the towns of Zillah and Verner along its L. & C. line. These later became Menlo and Halford.

In 1888 the town of Zillah was created in Thomas County to help support the Union Pacific Railroad that had just laid track within the county. In 1889 the government changed Zillah to Menlo due to a new post office that had just opened there. From 1890 to 1910 the people of Menlo built many useful buildings. In 1890 a new school was built. After 1890 the people of Menlo then built a general store, an implement building, and a broom factory. Other businesses included the Shellabarger Grain Co., the Farmer's Cooperative Creamery, the Robinson Grain Company, a doctor's office, a drug store, a lumberyard, and a hardware store. 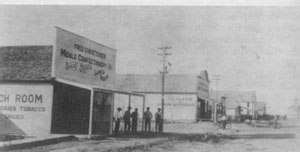 Classroom at Menlo schoolhouse in 1910 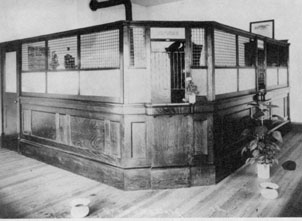 This town was founded in 1893 by Reuben (Doc) Misner who convinced the Union Pacific Railroad to move its station from Thurford, a post office which was two miles south. The town site was platted in 1907.

The first town in Thomas County was laid out and platted by Mary Hay, one of the most colorful personalities in the history of the county. She arrived in 1880 and homesteaded on the south fork of the Sappa Creek with her father. With no training in any of these areas, she soon became a minister, a doctor, and a farmer, as well as the first superintendent of Thomas County schools. The town of Otterbourne never succeeded despite of the best intentions of Miss Hay.

This town was founded shortly after the Chicago, Kansas & Nebraska Railroad came into Thomas County. It was first a depot along the railroad line, then became a town.