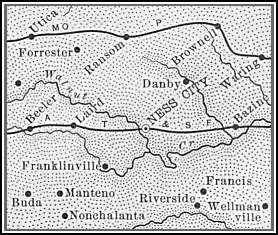 The founding of Ness City followed closely upon the heels of the organization of the county in 1867. Ness City became the 52nd county to be officially designated by the state legislature. The county had a name even before it was surveyed; it was a trend of the times to name the counties in honor of Civil War veterans. Noah V. Ness was in Co. G. of the Ks. 7th Cavalry when he was wounded on August 19, 1864 at Abbeyville, Miss. in the war for the Union. Very little was known about him prior to the date of his death until recently. There were no known residents in the county at the time the legislature denoted it Ness County.

Because the history of Ness City is so closely linked to the county history, it is important to mention that the first settlers were brought here by Dr. Samuel Grant Rodgers, a very controversial figure who made every effort to organize the county. His plan succeeded against tremendous odds. His every move was criticized. He was subject to claims of greed and presumed to have filed false reports and unkept promises to early settlers. It was never proven that he defrauded the county. He eventually departed the county never to return. A cloud still hangs over the records of his ventures. However, he accomplished his goals: to populate the area and to get the county organized.

Ross Calhoun is regarded as the "Father of Ness City." He arrived in Ness City in 1877 or 1878 and straightaway set about the task of establishing a town that he would call Ness City. Calhoun, who made his soldier's filing upon the quarter section embracing the original town site in the spring of 1878, opened a pioneer store the following June. In October of the same year, he formally laid out the town and invited "the world and the rest of mankind" to join him in building here. Other towns and town sites were springing up everywhere and it followed that a county seat had to be designated. Thus began a controversy that raged for some time, resulting in much bitterness and ill will between the citizens of the various townspeople.

The names of Ross Calhoun and N. C. Merrill are synonymous with the history of the area. Both endeavored to found a town in the exact center of the county. Each was hopeful that his town would be the county seat. Neither man anticipated the turmoil that would erupt before a choice was finally made by the voters.

Merrill established the town of Clarinda. Calhoun busied himself with the charge of taking care of the Ness City populace. Other towns joined in the pursuit to urge the Governor to select the county seat.

In the beginning it seemed that Merrill and Clarinda were the favorites. Clarinda had a newspaper called the "Pioneer." The town could also boast of a general store, hardware, doctor, drug store and hotel. However it soon became evident that there was no water. That summer the town was literally demolished in a windstorm. The editor of the newspaper and Merrill were no longer friends, so Merrill simply moved to Sidney where he founded his own paper, "The Walnut County Times." Ross Calhoun continued to extol the virtues of Ness County but made little of Ness City. Ness City had no paper of its own to publicize its advantages. It was thought by many that Sidney was perhaps the best of the two to be the county town. It had the privilege of having a resident, J. P. Johnson, who was a close personal friend of Governor St. John. With Waterport and Clarinda barely able to enter the race the selection apparently became a race between Sidney and Ness City. At the onset the fight became bitter. Each town went to extreme lengths to gain recognition from the Governor to select their town. In the meantime, Merrill sold his newspaper to John F. Wood. Wood renamed the paper "The Ness City Times" and moved it to Ness City. The battle seldom was just a race for the county seat. Meetings became heated and usually ended in a brawl. Finally the Governor made a choice. On April 14, 1880, he designated Sidney as the temporary county seat appointing J. E. Farnsworth and L. Weston as commissioners. James Elting was picked to be County Clerk.

An election was scheduled for a later date with all five interested towns running. Eventually Schoharie and Waterport withdrew. Election results gave the county seat to Ness City. Those Ness City supporters were delirious with joy over the triumph. One resident could not resist the urge to write the Governor and exult over the triumphant victory. He was elated and couldn't help but point out that while the Governor had picked Sidney to be the county seat, Ness City was obviously the voters choice.

The joy of conquest was short lived. The Sidney group set out to prove the election was won in Ness City through bribery. They further accused Ross Calhoun of having induced the voters by using fraud, corruption and bribes. They sought to have the election set aside by claiming that it had been illegal and that the victory had been accomplished only because Calhoun could offer bribes of gifts and land grants to those who voted for Ness City. They claimed at least 135 of the votes had been procured through these means. Finally on February 4, 1882, the ruling of the Rice County Court showed that Ness City could indeed retain the title of county seat. The case was appealed, but the Supreme Court upheld the decision of the lower court. It appears likely the the promises of Calhoun to the poverty stricken settlers did influence them to a great extent. The county seat fight lasted from June 1, 1880 to January of 1883. The awful expense of time and money created a bitterness that kept the county divided for many years.

Nelle C. Nye presented the following to members of the Gradatim Club, (I have no actual date for the presentation). "In 1880 in Ness County the people had to decide upon a county seat so a courthouse could be established so the first county officers would have a place for offices and a central meeting place for the citizens...The real battle was between Sidney and Ness City. Jacob Spidle, who was boosting Sidney, said Ness City should not be the county seat because it had no water and accused John Gardner of hauling water from Sunset Lake to fill the wells in Ness City so people would believe that Ness had an adequate supply. This was refuted by Mr. Gardner in a statement he had put in the Ness City Times. Ross Calhoun countered Jake Spidle's water story with one about seeing drift wood around Sidney and that if the North Fork flooded Sidney would be inundated. It was a dirty campaign. John Wood reported in his paper that 'a good deal of Scurrility and unruly abuse was indulged in.'  Vote buying, drunkenness, using names of the dead and any number of things. Ross Calhoun was the first to talk to the governor and find out what was necessary so he had a little advantage. Also, he offered much more in the way of real estate. Ross Calhoun gave to Ness City from his homestead a block for a courthouse and jail, a lot for a school (Historical Building), every other block or alternate block in the original town and the use of a 2 story stone building for a period of 10 years. Well, Ness City won, but Jake Spidle of Sidney sued Ross, stating that he had listed 5 non voters, charged him with fraud, bribery, corruption and the same charges the candidates use now. However, he lost the case."

The present courthouse was built in 1917 on the ground Ross Calhoun gave the county in 1880, thirty seven years after the great controversy between Ness City and Sidney.

With the county seat now being established, the next step was to incorporate Ness City. On July 6, 1886, the notice to do so was filed and signed. Some of the early city officials were Fred C. Borthwick, W. D. Miner, Ross Calhoun, Geo. O. Hunt, A. W. Wilson, Howard J. Floyd, Geo. P. Lohnes, Sam Beardslee, W. F. Turrentine, O. R. Scott, P. W. Lundy, who was elected mayor in 1947 and held that position for the next twenty years, Charles L. Durfee, Basil Marhofer, and Andrew F. Schoeppel. Schoeppel served as county attorney, became Governor of Kansas and later was elected U. S. Senator.

Written by Mary A. Bain