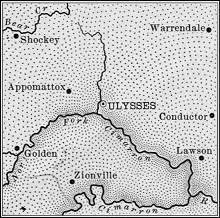 The Ulysses Town Company founded the town site of (Old) Ulysses in June 1885 after government land was available for purchase. George Earp, first cousin to Wyatt Earp, was an employee of one of the members of the town company, C. O. Chapman. Mr. Earp oversaw a crew of surveyors that platted the land where the town would be started, and he was later elected the town site agent by the town company.

Old Ulysses was located in Hamilton County at the time it was platted because in 1883, Grant County disappeared along with 7 other counties that had been established in 1873 by the Kansas Legislature. Grant County, named in honor of General Ulysses S. Grant, was re-established and organized on June 9, 1888.

Governor John Martin appointed Colonel T. J. Jackson of Newton to take a census of Grant County in 1887 after the Ulysses and Cincinnati newspapers both championed the cause of becoming the county seat. His census report said that Ulysses had won by a majority of 144 votes, according to a telegram sent to George Earp on August 24, 1887.

The Cincinnati citizens charged fraud in the results of the census. The judge granted a temporary injunction that kept the governor from acting on Jackson's report.

In December 1887, the towns of Cincinnati and Surprise consolidated and were determined to keep the fight for the county seat ongoing. The new town, which was called Appomattox, was the loser in the election held on October 18, 1888 to Ulysses by 236 votes.

Once again, the residents of Appomattox charged fraud, this time in the election, and in May 1890, the state Supreme Court ruled that another election should be held. Over 300 votes in the 1888 election were found to be fraudulent.

An election was held on June 17, 1890 and Ulysses won this election with 180 votes to Appomattox's 136 votes. Ulysses became the permanent county seat.

In 1886, residents had voted bonds for sidewalks and other improvements, and the investors were from the East. Only a few things were built using the bonds, however, such as a small courthouse and a school that was built cheaply. It was also alleged that the bond money was used to finance the county seat election in 1888.

There was a drought in 1889 and a nationwide financial panic in 1892. Also these were not good years for the crops, and the Cherokee Strip opening in 1893 also took a toll on the town. There was also no bank in Grant County from October 26, 1894 until April of 1907; the county treasurer was in charge of the banking needs for the citizens of the town.

The population of Ulysses had dropped to around 100 people in 1908 when the bonds and interest came due. The bond holders began legal action against the city when they could not collect the principal and interest. Once the residents found out that the city would have to levy a tax to be able to pay for the bonds, they realized that could spell bankruptcy for the town. Also, some of the citizens felt that they were not responsible for the debt. The only option that they could come up with was move the buildings three miles away from the original town site and out of the school district. This would leave the bond holders the land, but not the town.

Buildings had been set up on both sides of a street by late 1909, and the city of New Ulysses was set up. The post office was established on April 2, and the post office at (Old) Ulysses was closed on July 15. In November 1909, New Ulysses won the county seat in an election by a vote of 247 to 34. Shortly thereafter, the New was dropped from the name.

The main movement of settlers into Grant County was in 1885, 1886, and 1887. Up to that time there were only three cattle ranches in the county; the Pig Pen ranch on the south fork of the Cimarron, the D.C. Sullivan ranch southwest of Ulysses, and the T-V ranch located near the Cimarron in the southeast part of the county. In the spring of 1885 the town of Ulysses was started and arrangements were made to organize the county. The settlers began to arrive and take claims here. In 1886 and 1887 the boom was on and every desirable quarter of land was filed on.

Kansas Skyways has a web page that provides brief histories of the vanished towns in Grant County.

Information from the Historic Adobe Museum