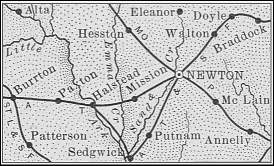 A large group of Welsh settlers homesteaded some land east of the present town of Burrton in September 1871. The town site was laid out by the Arkansas Valley Town Company in the spring of 1873. The plat was filed on September 6, 1873.

Mennonites settled in this area of Harvey County which is located close to the Reno County border. Burrton was named for I. T. Burr, who was vice-president of the Santa Fe Railroad. Its previous name had been Valley.

The post office was established in 1873, and that same year, the schoolhouse was built and the first church was organized by the Methodists.

Home to the first flour mill in the county, which was built by Bernhard Warkentin, Halstead became home to some Mennonites who established a church there in 1875.

The town was named after Murat Halstead, who was a Civil War correspondent. The city was incorporated in March 1877.

The Halstead Hospital was founded by Dr. A. E. Hertzler, the "Horse and Buggy Doctor" who had written several best-selling books. The hospital was well renowned throughout the Midwest.

Halstead was the setting for the movie "Picnic" in the mid-1950's.

Amos and A. L. Hess gave the land on which Hesston was founded. It began in 1886 around the same time the Missouri Pacific Railroad was building its line to McPherson. Hesston was incorporated about 40 years later in 1921.

The Mennonites settled in the Hesston area and founded Hesston College, then known as Hesston Academy, in 1909.

In 1870, the Santa Fe Railroad wanted a southern terminal to be the starting point of shipping cattle from the Chisholm Trail up to Chicago. The area they picked had no inhabitants and was right on the Chisholm Trail.

By July 1871, the railroad had finished its line and a town site had been laid out. Some stockholders in the Santa Fe Railroad were from Newton, Massachusetts, which was the namesake for the new town in Kansas. The town had attracted some of the lowlifes of the frontier, and Newton became known as "Bloody Newton". By 1872, the railhead had moved on to Wichita taking the lowlife population with it.

Mennonite settlers came to the area thanks to Bernhard Warkentin's endorsement of it. They started their own farms and planted the Turkey Red hard wheat which they had brought with them from Russia.

The railroad continued to play a huge role in the development of Newton when it made the town a hub. Fred Harvey built plants and staff facilities to accommodate the railroad passengers. The first depot was built in 1882, and it was razed to build a larger depot in 1900. That depot was razed to make way for a beautiful depot, which was built in 1929 and had the style of Shakespeare's house at Stratford-on-Avon.

In 1888, the Mennonites founded a college they named Bethel College, and a community grew up around it. Located just north of Newton, the village was seen as a separate town and was also isolated from its neighbor philosophically. The German-speaking residents were ostracized by their neighbors from Newton during World War I due to their pacifist views, and it took years for the two towns to become friendly towards one another.

North Newton was incorporated on September 30, 1938, but as Newton grew northward, one could not see a division between the two towns. However, even today, each town has its own post office and city government.

There are five areas in Harvey County with ethnic heritage. Newton, North Newton, and Hesston all have close ties to the Mennonite migration into south central Kansas in the 1870s and 1880s. Halstead also was the location of Mennonite settlement but to a lesser extent than the first three. A fourth community, McLains, seems to have had something of a Swedish heritage at its founding in the 1880s. However, it is most probable that the citizens who settled there came from other Swedish communities in the nation. McLains does not exist anymore as a town but there is a small settlement there, including a grain elevator and a fertilizer distributor.

Newton, and to a lesser extent Halstead, also have Mexican populations. Newton is a sizable culture center for the Mexican population due to the presence of the Burlington Northern Santa Fe Railroad facilities here. Newton was at one time a major point on the Santa Fe and thousands of Mexican laborers came here to work for the railroad. In time, many became permanent residents and second and third generation family members still work for the railroad. 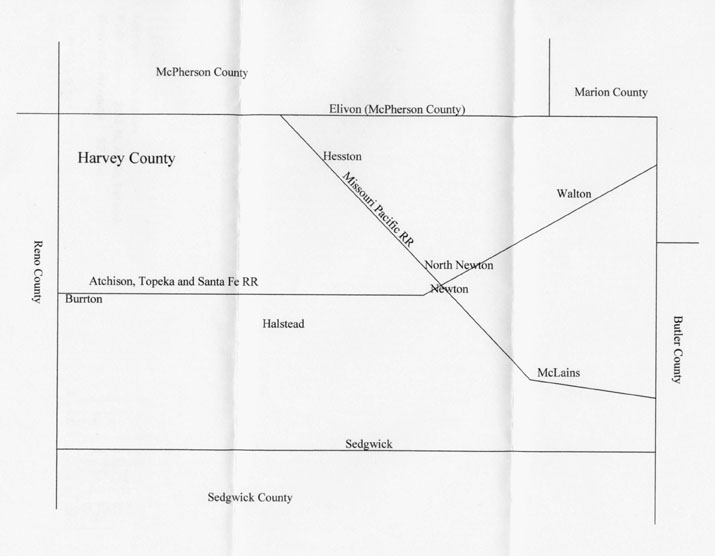 Founded after a period of rivalry between Newton and Wichita which was fueled from Newton's Texas cattle business and its railroad hub. Newton was just inside the borders of Sedgwick County in 1871, and in August, Sedgwick County voted in bonds worth $200,000 to finance a railroad extension to Wichita. The residents of Newton were only too happy to let Wichita deal with the cattle.

Talk of creating a new county began, and petitions were circulating in the Newton area in December 1871. The bill creating the new county passed in the Kansas Legislature on February 29, 1872. It was named Harvey County in honor of the governor, James M. Harvey. Newton was named the temporary county seat.

In March 1873, a bill was passed annexing Walton Township, previously of Marion County, to Harvey County. Also, a courthouse was not built until 1907 because the bond issues kept getting voted down because some residents were not happy about the county seat being in Newton. So until then, the county offices were housed in various buildings.

In 1869, a group of settlers formed the Sedgwick Town Company, and the company laid out the new town site in June 1870. It was the first city organized in what was to become Harvey County. The town was named for Maj. John M. Sedgwick of the U. S. Army.

A post office was established in the late summer of 1870. One of the first buildings in town was a schoolhouse built in September 1870. The town was incorporated on March 16, 1872, after the county was organized a few weeks earlier on February 29.

Sedgwick vied for the county seat, but Newton ended up with it, being as it was near the center of the county. Sedgwick is located at the southernmost boundary line which borders Sedgwick County. Today most of the town is in Harvey County, but part of it is in Sedgwick County.

Originally a 25-acre townsite laid out in December 1871, the official plat was filed 4 1/2 years later in March 1876. The post office was established in 1871, and a schoolhouse was built that same year.