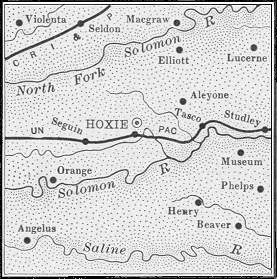 German families settled in this town which was founded in 1881. St. Paul's Church was built shortly after they arrived and by 1891, a school had been built. The church still stands today and its spire can be seen for miles around.

In March 1886, the citizens of Kenneth, located three miles north of Hoxie, received a proposal from the Hoxie Town Company to consolidate with them. The proposal also included the offer of moving the buildings from Kenneth to Hoxie. Kenneth also had to deal with a water problem in their area, so they gladly accepted the offer.

The Hon. E. J. Turner started the town of Kenneth after selecting the town site in the spring of 1879. But because of problems with getting water, the citizens accepted the offer of the Hoxie Town Company to move to their town, located two and one half miles away. By 1886, the town, which had been the county seat, was abandoned. It was vacated by the Kansas Legislature in 1901.

The town of Seguin started out as a work camp named Gerona in 1887. It was built by the Union Pacific Railroad on the Salina-Oakley branch line, and in 1888, a depot was built. The story goes that there was a foreman named Quinn, and when questions came up about work or where to get a drink, the response was "see Quinn". Eventually the settlement became known as "SeeQuinn", later changed to Seguin.

The name of Gerona Station was change to Seguin by the post office on March 18, 1889. A general store opened on April 10, 1890, and the post office records show that it opened the same day, so it is thought that the post office was in the store. However, the post office moved several times in the first 10 years of its existence. The first home was built in 1905. Businesses have included a creamery, a shoe shop and two elevators. The elevators have had the most economic impact on the town. By 1976, the population was 33, a decrease of 18 from the 1960's when the population was at its highest.

In 1873, Sheridan County was created by an act of the Kansas Legislature. It was named for General Phillip H. Sheridan. Its first settler, a buffalo hunter, settled here in 1872. The county was organized on June 2, 1880, and the town of Kenneth was named the temporary county seat.

The Chicago, Rock Island and Pacific Railroad was building through Sheridan County in 1888, and the early settlers voted for a $12,000 bond to be used in establishing a town along the rail line. A depot was built after the land was purchased and a town company was started. It was named for Selden G. Hopkins, a member of the town company.

The oldest town in the county, Sheridan was established in 1876 by George Kious and Mr. Bayliss. A post office was located one mile to the west, and Mr. Bayliss was the postmaster. The town was moved to Selden in 1888.

A British settlement founded by Abraham Pratt in 1878 when he came to America from England. He came with a partner, James Taylor, but Taylor migrated to Oklahoma shortly after arriving in Kansas. Pratt was soon joined by his two sons, and a half-brother, and two nephews of friends.

The first women to live in the settlement arrived in 1882 when the George Pratt family (no relation to Abraham) came to Studley with their daughters. The childhood sweetheart of Fenton Pratt, Abraham's oldest son, came in 1888; Jennie Place and Fenton Pratt were married on December 30, 1888.

Unlike the other British communities of Victoria (Ellis County) and Runnymede (Harper County), this settlement was made up of middle-class Englishmen. The other two settlements were founded by the sons of well-to-do English families and were known as the "Remittance Men" because they relied on their families for monetary support. Eventually these men returned to England.

The people who founded Studley were sheep ranchers in England, so they began raising sheep here in their new home in Kansas. The Cottonwood Ranch was built by John Fenton Pratt between the years of 1885 to 1896, and it is a state historic site today. Fenton Pratt incorporated the English architecture into his home.

Another family from England, the Frederick Turtles, came to Studley and built a small general store with a drug store in it in 1885. The English who settled in Studley stayed in Kansas and learned to live with and to work in the difficult conditions that Mother Nature threw their way.

Founded in 1888 by the railroad as a station for the rail line, Tasco was located 8 miles east of Hoxie. The Union Pacific Railroad had built the tracks, and the new town that was built around the station was named Guy. It was located at the junction of the Sand Creek and the South Fork of the Solomon River. It was named for the son of Charles E. Perkins who purchased a piece of government land in the area where Guy was founded.

Guy was the trading center for the new homesteaders that filed their claims on government lands. Their nationality was not really known, but they were thought to be of north European descent. Most of the people of Tasco were probably English, but it not known for sure.

During the 1920's, Guy or Tasco was a lively town, but as the years went on, people moved on to bigger communities. On June 15, 1923, the post office was renamed from Guy to Tasco, and it existed until December 31, 1953. Tasco was never incorporated.