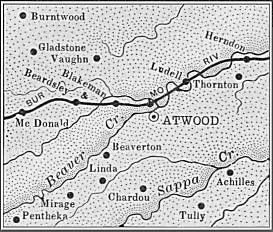 It was in the vicinity of the future town site of Achilles that the Battle of Sappa Creek was fought in April of 1875. Two soldiers and twenty-seven Indians, including eight women and children, were killed. In October 1878, Little Wolf and his band of Cheyennes were passing through and attacked the settlers who were living along Sappa Creek in revenge for the earlier battle. This massacre killed forty settlers, and it was the last Indian uprising in Kansas.

The Achilles Post Office was formed in 1879 or 1880 by Armstead Morris, who named it for his father, Achilles Morris, who was not a Kansas resident. The town site was laid out by Mr. and Mrs. J. W. Rush in 1887. Many of the lots were purchased by businessmen from Atwood, as it was rumored that the railroad was going to come through Achilles. The railroad never did lay tracks in this area, and although the town had a population of about seventy-five in 1887, it didn't grow much more. Shortly after a fire in 1911 which destroyed the Field and Badgley Store, the town began to lose its population and eventually became a ghost town.

J. M. Matheny and T. A. Andrews established the town of Attwood in April 1879, naming it after Matheny's 14 year old son. The original town site was two mile east of the present location of Atwood. By the fall of 1879, several businesses had set up shop in the fledging town, including a drug store, two general stores, a weekly newspaper and a post office. When it became apparent that Attwood was on school land, the town was moved to its present location in February 1880. The name changed to Atwood in 1882 at the request of the Post Office.

Atwood was named the county seat in 1881 after both Ludell and Atwood vied for it. Atwood later became involved in a county seat fight with Blakeman. (See Blakeman for that story). Atwood remained the county seat. The railroad had laid tracks a mile north of town, so a dray (a heavy dead-axle wagon used for transporting heavy loads) line for passengers and freight was set up to make it easier for people to get to the train. By 1901 the population had grown to 500 and the town continued to grow as businesses were built.

The Burlington and Missouri Railroad built tracks to the north of Atwood in 1886-1887, and the tracks continued along the creek to the junction of the Middle and North Beaver Creeks which was five miles west of Atwood. At that junction was to be the new town site called Blakeman. The B & M Railroad purposely set the tracks that way because they wanted their new town site to be the county seat. An idea was put forth by the railroad to move the entire town of Atwood to Blakeman in 1886, but it was rejected by the citizens of Atwood. The Lincoln Land Company, a subsidiary of the railroad, platted the land which become the town of Blakeman. A huge depot was built in Blakeman, and several buildings were moved from Atwood to Blakeman.

The railroad then began the campaign to move the county seat to Blakeman from Atwood. The town filed a petition that called for an election to relocate the county seat to Blakeman, but the county commissioners refused to do so because the required three-fifths of the registered voters had not signed the petition. The case was appealed to the Kansas Supreme Court by the B & M Railroad and Blakeman residents, but the court ruled in favor of the county commissioners. The controversy continued for some time until people tired of it and the Nebraska corporations (Lincoln Land Company and the B & M Railroad) gave up the cause in the early 1900's. Many of the buildings had been moved to Atwood, and in 1910, the Lincoln Land Company sold the town to W. E. Thompson who plowed the ground under and used it for farm land.

Rawlins County was named for John A. Rawlins, an adjutant for Ulysses S. Grant during the Civil War and who later became the Secretary of War in the Grant administration. The first homesteader was August C. Blume in 1875, and during the years of 1880 & 1881, the area was settled by a good number of people. In May 1881, Rawlins Township was organized as Rawlins County and Governor John P. St. John named Atwood the temporary county seat.

The Lorenz Demmer family came from Smith Center, Kansas, to claim a homestead in Herndon Township in May of 1876. In the spring of 1877, the Mathais Hafner family became the first of many Austrian immigrants to settle in the area. By the fall of 1879, a post office called "Pesth" had been opened with Lorenz Demmer being the first postmaster. Also in the fall of 1879, I. N. George, a pioneer merchant, set up a general store called "George Bros". He became the second postmaster, and renamed the town to Herndon on October 18, 1880. Mr. George was an admirer of President Abraham Lincoln, and he wanted to name the town Lincoln, but there was already another town with that name in Kansas. So, he chose to name it after Billy Herndon, Lincoln's law partner.

A lot of people who settled in Herndon were Austrian-Hungarian immigrants who wanted independence and a homestead of their own. The railroad came through in November 1887, and shortly thereafter a building boom took place in 1888. The town's number of businesses grew, but on December 23, 1905, there was a huge fire, presumably started by arson, that damaged most of the buildings. Businesses were rebuilt in 1906, and new businesses were started throughout that year.

Established first as a post office named Prag in 1876 by A. C. Blume, it became Kelso City after the Kelso brothers opened a store in the area on June 3, 1879. It was also known as Danube in 1880-1881 when the Kelso brothers moved to Atwood. William H. Dimmick laid out the town site and named it for his daughter, Luella, and on May 9, 1881, the name was changed to Ludell.

The Chicago, Burlington and Quincy Railroad built tracks through the town, and Ludell benefited from being a major shipping point in the area. Merchants did well and the town blossomed until the 1930's when the Great Depression occurred. Gradually the town declined during the years following the depression.

McDonald was preceded by a town named Celia, which was located three miles east of the present location. It had been platted by H. B. Franklin and there was a lot of interest in the new town. However, the Lincoln Land Company and the Chicago, Burlington, & Quincy Railroad had laid tracks a half-mile north of Celia and wanted the town to be moved to a new location.

The new town was platted on June 7, 1888 by the Lincoln Land Company, but the office of Register of Deeds shows that the document was filed on January 7, 1889; sales of lots began after that. The town was named after R. L. McDonald, a homesteader who had land and gave some to the town. Most of the buildings in Celia were moved to McDonald, including a restaurant and the Mercantile Store, but there were some who chose not to relocate. McDonald became a trading center for the western part of the county, but did not grow much bigger beyond the peak boom years of 1906-1907.