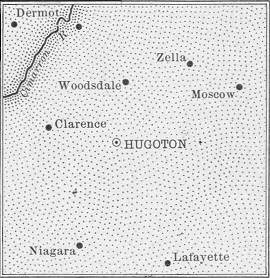 H. B. Kelly and John Hughes of McPherson selected a town site in what was known as Seward County in May 1881. They formed a town company after they returned to McPherson County, and it took another four years before claims were proven on the town site. It was July 1, 1885 that the first shanties were put together. The town was named Hugo for author Victor Hugo, but because there was already a Hugo, Colorado, the name was changed to Hugoton. It was selected as the temporary county seat on September 2, 1886. There was a bitter and violent county seat war that resulted in several deaths, including five men who were killed execution-style in Oklahoma. Hugoton was named the permanent county seat in 1887.

Founded in late 1886 by Quakers, Lafayette's post office was established on January 8, 1887.

The Moscow Town Company founded the town site on June 6, 1887. By mid 1888, there was a newspaper and a hotel. The name originally had been Mosco, an abbreviation of Moscoso, who was one of the men in Coronado's expedition. However, much to the dismay of the townsfolk, the post office added a "w" when a post office was established on April 28, 1888.The town began to decline in the 1890's because of the drought, and soon there were no buildings. The post office was moved from one homestead to another to keep the mail route going.

In 1912-1913, the Santa Fe Railroad built tracks through Stevens County, and the store was moved to a new town site by the tracks seven miles northwest of the old town of Moscow. The new town took the name of Moscow after the post office moved there.

On March 7, 1875, the legislature passed an act fixing the boundaries of Stevens, Seward and Kansas (now Morton) counties. In 1880, the Beaty Brothers brought in the first herd of cattle and established a ranch on the Cimarron River with the headquarters at Point of Rocks in (Kansas) Morton County. On May 16, 1881, men from McPherson, namely H. B. Kelly and John Hughes, made an exploration into Stevens County and selected a town site near the center of the proposed county. After their return to McPherson, a town company of sixteen persons was formed.

The 1880 census shows two men (possibly brothers) who were born in Ireland; their names were Patrick and Michael Quinn. The others living in the area at the time were from Ohio, Indiana, Kentucky, New Mexico, New Hampshire and New York.

The three counties were incorporated into one county in 1883; it was called Seward County. In July 1885, four years after the town company was formed, some members of the group came back to the town site and built shanties for homesteading purposes.

Governor Martin issued a proclamation for the organization of Stevens County on August 1, 1885, and the town of Hugo was platted ten days later. Stevens County was named for statesman Thaddeus Stevens, and Hugo was named after Victor Hugo. In 1886, the name was changed to Hugoton because of other post offices with the same name of Hugo. Stevens County was organized on August 3, 1886, and Hugoton named the temporary county seat on September 2.

There was a bitter and violent county seat war between Hugoton and Woodsdale. Hugoton was eventually named the permanent county seat in 1887. See story on the Woodsdale page.

Stevens County has always been an integrated county. Hugoton had many families homestead in the area, and as the people came west, water wells were drilled, farming was established, and schools and churches were built. The main agricultural products are cattle, wheat, milo, corn, soybeans, sunflowers, broomcorn, millet, and in the 2000 era, cotton and cucumbers were introduced as crops new to the area.

Natural gas was discovered in 1927 and many wells were drilled by Panhandle Eastern Pipe Line Company and others.

The town of Lafayette was founded by Quakers in 1886.

One of two towns involved in a county seat fight that came to a violent conclusion with the "Haymeadow Massacre", Woodsdale was founded in 1885 by Samuel Wood, an attorney from Topeka. Mr. Wood was born on December 30, 1825 in Ohio to Quaker parents.

Mr. Wood was upset that neighboring Hugoton had been chosen as the temporary county seat, so he began legal proceedings in Topeka to stop the organization of the county.

In August 1886, Wood was arrested and taken to Oklahoma by supporters of Hugoton who explained that he had gone on a hunting trip in the Indian Territory. However, Wood's friends were suspicious and started a search party to find him. They caught up with Wood and his captors, and Wood later filed civil and criminal proceedings against the Hugoton folks, but they were dismissed due to lack of evidence.

In June 1888, the Rock Island Railroad made a proposal to build two rail lines, one in the southern part of Stevens County and the other line in the northern part. Hugoton was halfway between the two lines, but Woodsdale would be close to the northern line.

Tempers began rising during a meeting about the rail lines held at Voorhees, a nearby town. Sam Robinson, marshal of Hugoton hit the under sheriff of Woodsdale with a revolver during the altercation. The under sheriff issued an arrest warrant for Robinson a few days later, but when Marshal Ed Short of Woodsdale went to Hugoton to arrest Robinson, a gunfight erupted between the two marshals. The Hugoton men outnumbered Short and ran him out of town.

A railroad bond election was held in late June, and it wasn't without controversy. The militia was called in when it became clear that the vote counting wasn't going to happen without conflict. General Murrey Myers and his unit went to the area and disarmed forces in both Hugoton and Woodsdale.

A month later, on July 22, after learning that Marshal Robinson was on a hunting trip, Marshal Short and several friends set out for Oklahoma to serve Robinson with the arrest warrant. They figured it would be the best time to this since many of his Hugoton supporters were not with him on the trip. Short did send word for Robinson to surrender, but he left the camp immediately. Marshal Short then sent for Woodsdale's sheriff, John Cross, and four of his deputies to help find Robinson. The deputies' names were Ted Eaton, Bob Hubbard, Roland Wilcox, and Herbert Tooney.

Two brothers who had been with Robinson, Orin and Clare Cook, returned to Hugoton, and after organizing a posse, they headed back into Oklahoma. They came upon Marshal Short and ran him out of the area. When Sheriff Cross failed to find Short or Robinson, he and his deputies headed back to Woodsdale.

There was a strip of land just south of the southern border of Kansas that was known as "No Man's Land". Today it is the Oklahoma panhandle. On July 25, the Cross party came upon a group of haymakers that were on land close by a place known as Wild Horse Lake about eight miles south of the Kansas border, and had made camp there for the night when Marshal Robinson and his men came upon the group and ordered them to surrender and hold up their hands. Robinson then shot and killed Sheriff Cross, and all four of the deputies were also shot. The Robinson party checked to make sure that the men were dead, and they shot each one again, except for Tooney, whom they must have thought was dead for sure. Tooney was able to go for help, and he managed to get to Voorhies (another town in Stevens County) where he was given medical attention. Robinson and his men escorted the people who were in the meadow making hay back to their homes, and then returned to the murder scene. They found only four bodies and started searching for Tooney...in the opposite direction that Tooney had taken.

Some citizens of Hugoton threatened to burn down Voorhies in an effort to run its citizens out of the county because they helped Tooney. Once again, the militia was called in to establish martial law in the area.

Robinson had disappeared from Stevens County before the military arrived, and Wood began the process of bringing criminal charges against Cyrus E. Cook, O. J. Cook, J. B. Chamberlain, Cyrus Freese, J. J. Jackson and Jack Lawrence. In a Federal Court in Paris, Texas, a hearing was held during October 1889 and the six men were indicted in the murders of Sheriff Cross and his men. It seems that Robinson was not at the hearing and that he had gone to Colorado after he left Stevens County a year earlier. It is known that he robbed a store/post office in Florissant, Colorado, and after being captured, he was convicted and sentenced to fourteen years in the Colorado State Penitentiary. This allowed him to be bypassed at the trial in Paris for killing Sheriff Cross and three of his deputies. The trial took place in July 1890, and the six men were found guilty and were sentenced to hang on December 19, 1890.

The case was appealed to the U. S. Supreme Court, and it was heard on December 11-12, 1890. On January 26, 1891, the Court's decision voided the convictions because it was determined that the Paris Court and all other courts had no jurisdiction over the site where the murders took place.

When Sam Wood went to Hugoton on June 23, 1891, to answer a "bribery charge" that had been brought against him, he was shot in the back as he entered the courthouse. Wood tried to get away, but the shooter, James Brennan, shot him two more times which left Wood dead. The presiding judge, Theodosius Botkin, gave Brennan to the custody of the sheriff of Morton County, which was what Brennan asked for. Botkin was an enemy of Wood, and it is not for certain, but it could be possible that Judge Botkin could have been a suspicious party in getting the treacherous charge leveled against Sam Wood to bring him to his court. Judge Botkin was also involved in the Seward County Seat wars, as well.

Brennan had been a witness for the defense in the Paris trial, and apparently he did not like the way Wood had questioned him; his anger led him to kill Wood. He was arrested and held in the jail without bond. However, Brennan was never tried for murder due to several factors - 1) it had been determined that he could not receive a fair trial in Stevens County; 2) the change of venue was never requested because under Kansas law at that time, only the defense could request a change of venue; and 3) due to another law that stated that if an accused man was being held without bond and had not been tried in two regular court sessions, he was to be released.

Charles Curtis was one of the lead attorneys who represented the state during the Brennan case. He later served as Vice-President of the United States in 1929-1933.

Hugoton was named the permanent county seat in 1887 and that signaled an end to, not only the Stevens County Seat War, but also to the town of Woodsdale.