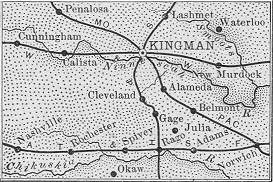 Founded on February 1, 1892, as a post office, Gage later became the location of a station on the Hutchinson, Oklahoma, and Gulf Railroad line. When the Atchison, Topeka and Santa Fe took over this line on January 1, 1901, they changed the name to Basil. In 1937, the Basil and Cleveland mail routes were combined and the Basil post office was closed.

Organized as a post office in 1879, a town site was approved on September 14, 1885. Soon there were two general stores, a livery stable, and a restaurant among the businesses that set up shop in the new town. The Denver, Memphis and Atlantic Railroad built tracks through Belmont in 1886.

The town's demise was created by a number of different factors - a fire, bank robberies, loss of the town doctor, and the depression in the 1930's. Only a few people remained in Belmont.

Clyde Cessna, founder of the Cessna Aircraft Company, was raised a few miles south of Belmont.

The town company laid out the site for Cleveland in October 1879 along the Kingman - Medicine Stage Line. A post office opened on January 2, 1880, and by 1881, Cleveland petitioned for the county seat. The results of an election held on November 7 determined that Cleveland's attempt to be the county seat failed. Kingman continued its status as the county seat.

The Hutchinson, Oklahoma and Gulf Railroad arrived in Cleveland in 1890. Because there was another Cleveland on the railroad line (in Oklahoma), the station was named Carvel. The town peaked in the early 1900's, and today there are fewer than 25 residents.

The town of Cunningham was first named Ninnescah in honor of the nearby river, and by 1885 there were several buildings, including a hotel, two stores, and a church.

The Kingman, Pratt, & Western Railroad Company had built a railroad line to the north of Ninnescah in early 1887. A tornado demolished the town on March 24, 1887, and the residents decided to rebuild the town north of the tracks. The new town was named Cunningham in honor of Colonel James D. Cunningham who was a director and surveyor for the railroad. The post office also changed its name to Cunningham.

A man from Reno County, J. H. Fical, moved his house from there to the north side of the Ninnescah River in Kingman County. Sherman was the name of the town that was started at that site, and it was later changed to Kingman. The town was laid out in 1874 by J. H. Fical and his brother. The Sherman Hotel was built in 1874, and a store, a school and some houses were also built in that time frame.

By 1878, a town had been started on the south side of the river, and many Kingman residents and the post had moved there. Rivalry between the two towns prompted many hard feelings, but after about a year of dealing with the unfavorable conditions, buildings were moved back to the north side.

The first railroad came through in June 1884. After rock salt was discovered in 1887, the town grew to accommodate the new residents of the boom-town.

There was a period of hard times because of weather (drought) and an invasion of grasshoppers. The people hung in there during these times, and the situation became much better in the early 1900's. Kingman is the county seat.

Named after the founders of the Wichita Eagle newspaper, New Murdock was founded on March 17, 1884. The name changed to Murdock on January 4, 1914 when the Butler County town of Murdock closed its post office.

Founded in 1885 by settlers from Nashville, Tennessee, Nashville became a thriving community after the Atchison, Topeka and Santa Fe Railroad built its tracks to the town site.

Many of the settlers were German Lutherans and they found the first Lutheran church in town. Beginning in 1890, they met in the homes of parishioners and in public buildings until a church building was built in 1904.

Peketon County was created by the Kansas Legislature on February 21, 1860. This county was huge, as its boundaries encompassed one fourth of the state. It became defunct on February 26, 1867 when it was attached to Marion County.

Harper and Reno Counties were created out of Marion County in 1868 by the Kansas Legislature. In January 1872, three tiers of townships on the south side of Reno County were detached to become Kingman County, and Harper County's north tier of townships were attached to Kingman County. Governor Thomas A. Osborn organized the county on February 27, 1874.

The county is named for Samuel A. Kingman who had served as Chief Justice of the State Supreme Court.

The Nashville area was settled by German Lutherans who built the first Lutheran church in town.

Situated on the Osage Indian Lands, Norwich was founded in 1885. People began arriving to settle in this new town, and soon a railroad line was built by the Denver, Memphis and Atlantic Railroad. A hotel, an opera house, and a bank were among the buildings that were part of the town's landscape.

Plotted in 1886 and named after a Spaniard (Penaloza) who had come through the area while working on the railroad, Penalosa did not start growing until several years later. By 1912, there were two elevators, a barber shop, a grocery store, a hardware store and two department stores among the businesses in town.

The Rago Trading Post was established in early 1883 at a location two miles east and four miles south of the present town site. In September 1883, it moved four miles north where a post office was then established. The town site was platted in 1886 and its location was two and one-half miles west of the trading post.

Several businesses were built, and the post offices from Old Rago, Trento, and Pitt were moved to the new town site in 1887. They thought it would be an ideal site for the Hutchinson and Southern Railroad to build tracks to, but the tracks were built one-half mile east. The town moved, once again, in 1900 and has stayed in that location.

Platted by the Arkansas Valley Town and Land Company, the town site of Spivey was named in honor of Captain R. M. Spivey who was president of the town company. It became incorporated in 1887 after the post office changed its name from Leland to Spivey on December 6, 1886. The Santa Fe Railroad built tracks through the town and ran its first passenger train through Spivey on Christmas Day 1886. By 1904, there were 800 residents, but today the population is less than 100.

Waterloo began as a way-station where two trails met. A small village was beginning to develop in 1879 and a plat was filed on July 7. The post office was had been named Stanford since its establishment on March 5, 1878, was changed to Waterloo in 1881.

Waterloo never became a railroad town as it had been hoped for because the railroad went through Murdock about five miles south.

Twenty-five families founded and settled in Peters around 1884. They soon had a post office and a grocery store. The name was change to Willowdale in 1902.

Settlers came to this area during the fall and winter of 1883 and the town they settled in was named Rochester. A trading post was set up in 1884, as were a general store and a blacksmith shop. By 1887, the Mulvane and Englewood Railroad built tracks to a newly platted town called New Rochester which was right next to Old Rochester. The businesses mentioned above were closed in Old Rochester.

The names of Old Rochester and New Rochester were too confusing, so the name of the town was changed to Zenda after a book titled "The Prisoner of Zenda". The post office changed its name from Rochester to Zenda on October 7, 1892.