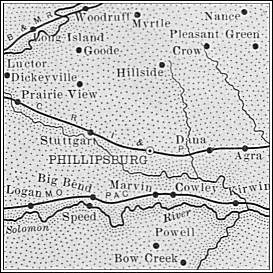 Like the other towns in Phillips County, many of the families came from states like Iowa and Indiana to take advantage of the government's offer of free land. One family of settlers in Agra was the William Addie family who came from Wisconsin; William was born in Scotland and his wife, Elizabeth, was born in Ireland.

The Big Bend post office was established on November 4, 1878 one mile west of the current town of Speed. The town of Big Bend was platted on October 8, 1887. It was located there after the railroad came through and was given its name because of the bend in the railroad tracks. The town was later incorporated on the 2nd of January in 1928 as Speed.

The settlement, originally known as Dana, was platted on September 15, 1887. The railroad later changed the name to Gretna on April 29, 1907. Many of the families that settled here came from Missouri. There were not any current residents according to the census of 2000.

The Kirwin Town Company formed in June 1871 which made Kirwin the first permanent settlement in the county. It was named for a nearby stockade call Camp Kirwan which was commanded by Colonel John S. Kirwan of the 1st U.S. Cavalry. The stockade was used to protect travelers on the California Trail shortly after the Civil War ended. The land where Kirwin eventually was founded was the first to be settled in the area. It became the biggest town in the county, but soon lost that distinction to Phillipsburg.

Settlers first came to this location on the northern banks of the Solomon River in 1870. The area was briefly called Deeversville. D. G. Hoover, one of the first settlers, renamed the town on June 2, 1873 to Logan after his army commander from Illinois, General John A. Logan. Little progress was made in the town during the first few years, but in 1878 several business men settled in the area. Logan soon became an enterprising town with flour and sorghum mills, along with other businesses such as general stores, hotels, and a bank.

Phillips County was established in 1872 after Governor Harved issued a proclamation declaring its organization. The county was named after William Phillips, a Free-State supporter, who was murdered on September 1, 1856. A different William Phillips is the namesake for the town of Phillipsburg.

This settlement is located in the middle of an 8 mile long valley with Prairie Dog Creek to the south and Elk Creek to the north. The story is that the Indians named the area Long Island because of the land being between two bodies of water. Some of the first settlers came in 1869. By 1873 many families had settled in the area. In 1885, the town was moved to be on the railroad, and it prospered for many years at that location.

The town was laid out in 1878 under the name of Marvin which was the name of a lieutenant in the area watching for Indian troubles. It was platted as Marvin in the year 1883. Three other towns, Kildare, Chillicothe and Cowley, were also located near Marvin. Kildare was on the north-south road of the Ft. Hays-Ft. Kearney route, and Chillicothe was on the Pike's Peak road that ran north and south from Ft. Hays to Pikes Peak. All three towns eventually consolidated into Marvin. There were problems with the mail service to Marvin and Marion (another town in Kansas) due to the closeness of the spellings, so it was petitioned in 1908 to change the name of Marvin to another name. The name of Glade was picked, but the year when the name was changed is unknown. The town of Glade became incorporated in 1948.

Founded and laid out in 1872 by settlers from Doniphan County, Phillipsburg was named for Col. William A. Phillips, a member of Congress from Kansas. Governor Harved issued a proclamation organizing Phillips County in 1872, and he designated Phillipsburg to be the county seat. Families started arriving in the fall of 1872 and began building homes and businesses.

Founded by Daniel W. and Mary E. Thomas, Robert and Olive E. Thomas and the Kansas Town and Land Company, the settlement was platted on September 24, 1887.

Founded in 1872 and located in Mound Township, Stuttgart was originally named Wagnerville. When the Rock Island Railroad came through the area with new tracks, the town was moved to a new location by the railroad. It was renamed Stuttgart in 1888 after the town of Stuttgart in Germany where many of the settlers came from. There were not any current residents according to the census of 2000.

The town was platted on July 23, 1885 by the Lincoln Land Company, which platted several other town sites in Phillips County. Woodruff was named after the grandfather of a child of a railroad worker. There were not any current residents according to the census of 2000.