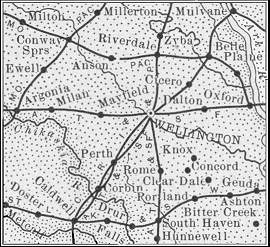 Sumner County, organized in 1871, is named for a Massachusetts senator, Charles Sumner. Sumner borders the Oklahoma state line and neighbors the Kansas counties of Sedgwick, Harper, Kingman, and Cowley. The county seat is Wellington.

The county’s namesake, Charles Sumner, is famous in Kansas for another reason. Sumner, an abolitionist, opposed the bill that would have expanded slavery into Kansas Territory. He was severely beaten for his beliefs by South Carolina representative Preston Brooks. Brooks beat Sumner with his cane in the senate chamber. The beating came after a speech given by Sumner entitled “Crimes against Kansas.” Not only did the speech criticize Brooks’s pro-slavery ideology, but it also offended him personally by mentioning and criticizing his uncle, Senator Andrew Butler of South Carolina. Sumner refers to Senator Butler as “one of the maddest zealots” and suggests that Butler sees himself as a chivalrous knight who is protecting the “ugly harlot, slavery.”

Another claim to fame held by Sumner County is being the home of the first woman mayor ever elected in the United States. Susanna Madora Salter served as mayor of Argonia in 1887. Her home is still currently kept as a museum.

The Chisholm Trail played a crucial role in Sumner County’s growth and development. The trail, named after Jesse Chisholm, entered southern Kansas just south of Caldwell, eventually passing through it. This route provided an efficient trade route and was used as a cattle drive in order to move cattle into and past Indian Territory. Once settlers began fencing in their land, the cattle drives ended and were not revived again until the Santa Fe Railroad came to Caldwell.