W. R. Hill, a white man, came up with the idea for a town called Nicodemus. Hill had come to Western Kansas from Indiana during the summer of 1876. He settled in Graham County and started making plans that fall for the county seat of Hill City. It was around this time that he thought of setting up an all-black community in the area. He talked with a group of African-Americans who had migrated to Topeka from the South. They liked the idea of the town and started organizing and planning. In June 1877, Hill selected the town site, and by June 18, Nicodemus had its first settler, Reverend Simon Roundtree. Roundtree sent out a circular dated July 2, 1877, which invited all black people to come live in the "Great Solomon Valley of western Kansas".

This circular contained a poem that explained the name of the colony. It was not from the biblical Nicodemus, but from a legendary slave who arrived in the second slave ship to America. He purchased his freedom later. He was believed to be a prophet as the poem says:

Nicodemus was a slave of African birth
And was bought for a bag of gold;
He was reckoned a part of the salt of the earth;
But he died years ago, very old.

Nicodemus was a prophet; at least he was wise,
For he told of the battle to come;
How we trembled with fear, when he rolled up his eyes,
And we heeded the shake of his thumb.

The colonists added a chorus to fit the colony:

Good time coming, good time coming,
Long, long time on the way;
Run and tell Elija to hurry up Pomp
To meet us under the cottonwood tree,
On the Great Solomon Valley
At the first break of day.
(Schwendemann, 1968)

Another source, the Bogue Messenger dated February 25, 1932 stated "that the leaders of the colony were righteous men, hence the name was taken from the scriptures. It relates too that Nicodemus, the ruler of the Jews, came to Jesus by night". (Belleau, 1943)

Around thirty settlers had taken up residence by July 30. Included were W. H. Smith, the president of the newly-formed Nicodemus Town Company; Z. T. Fletcher, the secretary of the company; Roundtree; Jerry Alsup, Jeff Lindsey, and William Edmunds, who were all trustees of the company. Fletcher's wife was the only woman until a large group of colonists, under the leadership of W. H. Hill, arrived in mid-September from Kentucky.

Hill had spent the month of August in Kentucky recruiting African-Americans to come to Nicodemus. He recruited nearly 300 former slaves from Lexington, Kentucky, and they arrived at Nicodemus on September 17, 1877. This date has been celebrated as the founding of the colony.

In the spring of 1878, a large group of settlers came from Georgetown, Kentucky, to settle in Nicodemus. There were about 200 colonists who finally made it; other had found opportunities along the way that were better for them or they decided to not go on to Kansas. Two ministers came with the group: the Reverend Silas M. Lee and the Reverend Daniel Hickman. Lee founded the Nicodemus First Baptist Church, and Hickman founded the Mt. Olivet Baptist Church, which was located near Hill City.

Arrivals continued to come throughout the rest of 1878 and into 1879. By 1880, the population was between 500 and 700 people. There were two different census reports which is why there was such a difference, but there was no reason given for having two reports done.

Many settlers left the colony between 1877 and 1880 because of the rigors of frontier life. The first thing the settlers had to do was build some shelters. They built dugouts along river banks or small hills. This led to the sod house, which was built three or more feet into the ground and topped with sod blocks from the prairie. Another problem the settlers faced was that of an inadequate food supply because of the lack of money. There was no way to get work in a community that was just starting.

These African-American settlers, like their white counterparts, had to cope with Indians, hot winds, droughts, and blizzards. It was not unusual for a settler to plant his crops and lose them to nature's fury. These settlers, black and white, had a tough life, but with a true pioneer spirit, they stayed with it.

The African-Americans did not have much farming equipment. They were farming with spades and grubbing hoes. Two men, who had an implement used to turn the prairie sod, came into the area in the fall of 1878. They offered to turn the sod at two dollars an acre, and many farmers in the area took advantage of their offer. By the time they finished, there was an average of almost five acres of cultivated land for every homestead. By 1881, that average was up to ten to fifteen acres.

While the people of Nicodemus were making political progress, the town itself was progressing. By 1881, Nicodemus had thirty-five buildings, both residential and commercial. there was a general store, a drug store, a meat shop, three hotels, a lumberyard, two livery stables, two churches, one four-room schoolhouse, and numerous houses. The houses were being built with wood instead of sod blocks.

The people of Nicodemus like to celebrate during the 1880's. Holidays included the Fourth of July, Emancipation Day (August 1) and the day the colony was founded (September 17). Emancipation Day celebrated the liberation of the West Indies' African-Americans. The people also enjoyed their social life. By the mid-1880's, the town had a literary society, a baseball team, an ice cream parlor, several lodges, and a benefit society. All of these things were an indication that the business center of the town was growing. In 1887, the town had four general stores, two druggists, a grocery store, a lawyer, three land companies, two hotels, a blacksmith shop, two livery stables, and a harness and boot repair store. Also, in 1887, a bank was established, which made Nicodemus a prosperous commercial center.

A lot of the town's prospering business came from reports that two railroad companies were going to build through Nicodemus. The Union Pacific was building to the south and would have to cross the Solomon River to get to Nicodemus. A better chance of getting a railroad was offered by the Missouri Pacific. This railroad would come through Stockton and be built to Graham County, via Nicodemus. Unfortunately, both plans fell through. The Union Pacific built its line south of the river, crossing to the north bank to go to Hill City. The Missouri Pacific stopped the laying of its tracks at Stockton.

Between the dates of 1878 and 1953 (when the post office closed), Nicodemus lived and prospered for seventy-six years. According to Schewendemann, the Atchison Weekly Champion, in its September 1, 1883, issue gave a fine tribute to the town:

"The writer noted that someday Nicodemus might become no more than a name, "the waning and fading designation of spot where men once lived; but to those who know the truth of history," concluded the writer, "the name will always recall the bravest attempt ever made by people of any color to establish homes in the high plains of Western Kansas."

Nicodemus is a spot along Highway 24 between Hill City and Stockton. There are between fifteen and twenty residents living there today. A federal housing project was built there in the early 1970's. Nicodemus was also well-known as the home of Ernestine's Barbecue, which recently reopened in Bogue under the management of Angela Bates-Tompkins.

The National Park Service, in 1976, designated Nicodemus as a National Historic Landmark. Nicodemus became incorporated because of a bill signed by Governor John Carlin on April 14, 1981. The law exempted Nicodemus from another law that states a community has to have 300 residents before becoming incorporated. On November 12 of 1996, Congress established the Nicodemus National Historic Site. Click here to visit the official web site:
http://www.nps.gov/nico

The above essay is an excerpt from a paper written by Patty Nicholas, Special Collections librarian, in 1981
for a history class at Fort Hays State University. Some information has been updated.
The following information contains the sources used in writing the paper.

Federal Writers' Project of the Works Projects Administration for the State of Kansas. Kansas: A Guide to the Sunflower State. New York: Viking Press, 1939.

Source for the Pictures 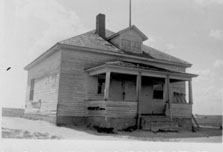