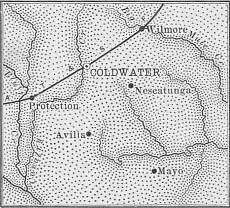 The 1890 census does indicate a German settlement in the town of Avilla. Avilla was located south of Coldwater and ceased to exist as a town in the 1890s.

Coldwater was established in 1884. A group of men from Harper County set out to establish a county seat centrally located in Comanche County. When they found the perfect destination they came in contact with a man named Mr. C. D. Bickford who was already figuring on setting up his own township in this location. They agreed to let him name the town if he would give up his own township project. Being from Coldwater, Michigan, he decided upon the name of Coldwater.

Main Street in Coldwater in the 1920's 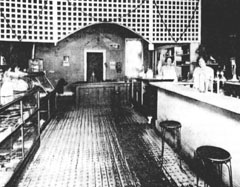 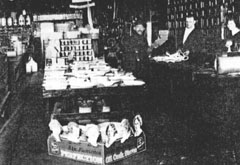 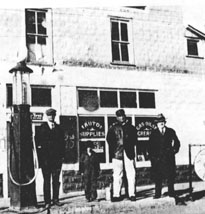 The first real residents of the region were Indians of the Comanche, Kiowa, Cheyenne, Arapaho, and Plains Apache Indians. They camped along the streams and hunted bison on the prairie. The southern part of Comanche County was once Indian Territory. In 1878 the Cheyenne left their reservation in Oklahoma and made their way to Kansas toward what they still considered their homeland: Comanche County.

In the late 1800's the county began to thrive and was once populated with over twenty townships and post offices. Coldwater was established as the county seat in 1885. All that remains today of this agricultural community is the towns of Coldwater, Protection, Wilmore, a local church, and a few houses of the once populated town of Buttermilk.

Gilead was a settlement founded by Rumanian Jews who came to the area in 1886. German settlers founded a town called Avilla before 1890, but it did not last.

After the Jewish colony of Hebron in Barber County had experienced a nice growth during its first two years, the Montefiore Agricultural Aid Society set up a nearby colony which was named Gilead. Founded in March 1886, Gilead was a colony of Rumanian Jews. About a dozen families settled in a spot about 3 miles south of Evansville.

However, a ten-year period of drought began in 1887, and there were also some severe winters. By 1891, there were no settlers left from the Gilead colony.