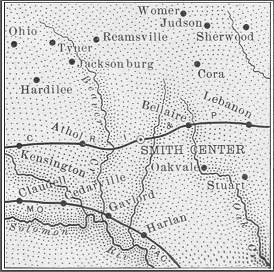 First named Corvallis when it began as a post office on February 19, 1875, the name was changed to Athol on February 8, 1888. The town had begun to grow after the Rock Island Railroad had laid tracks to Athol in December 1887.

Located 6 miles east of Smith Center, Bellaire was established as a railroad station when the Rock Island Railroad came through. A post office opened for business on March 6, 1888.

A group of settlers arrived in the western part of the county in the fall of 1870, and on October 25 founded the town of Cedarville where the Cedar Creek flowed into the Solomon River. The Town Company of Cedarville filed papers on January 28, 1871. A post office was established on July 3. Cedarville was the first county seat, but lost the title to Smith Center in 1872.

This little village was located 15 miles southwest of Smith Center along the Solomon River. The post office was the last one to be established on the county; it opened on November 18, 1898.

The Gaylord Town Company was organized in January 1871. The town site was laid out and named after C. E. Gaylord. The first grocery store was opened by C. P. Newell in the spring of 1871, and the post office was established on June 2, 1871.

H. H. Granholz, H. Menshoff, L. Bierman, J. Rider, and A. Aldredge were the first recorded German settlers in Smith County. In 1871, they settled on West Beaver Creek, and by the end of the year, there were more settlers that had arrived and started to make their homes in the area. A lot of them came by themselves, but settled near by fellow Germans.

A post office was established with the name of Germantown on December 18, 1871 with Frederick Wagner as the postmaster. It was discontinued on June 30, 1893.

The town of Harlan started out as a post office with the name of Thompson on January 23, 1872, and the name was changed to Harlan on September 11, 1877 after a town site was laid out. It was probably an outgrowth of the Dresden and Eagle Rapids post offices, both of which were discontinued. It once had an institution of higher learning called Gould College which was under the auspices of the United Brethren Church.

The Kansas Legislature created Smith County, along with thirty-two other counties, on March 3, 1867. The county was named in honor of Major Nathan Smith, a member of the Second Colorado Cavalry, who was killed at the Battle of the Blue.

Settlers began arriving in 1867, as the first reference to a settlement in the county was from a story written by Harry Salmons. He said that his family laid claim to a piece of land near the present site of Gaylord on the north fork of the Solomon River.

Some of the early settlers were families from Holland who set up homes near Oak Creek on the county line in 1871. It was near the Osborne County settlement of Dispatch.

Also arriving in Smith County in 1871 were Germans who started the community of Germantown in the western part of the county along Cedar Creek. Other settlers were from Canada, England, Ireland, Scotland, Sweden, Norway and Denmark.

The county was organized in 1872 and Cedarville was the first county seat.

"Home on the Range"

Dr. Brewster Higley was a medical doctor who had made his way to Smith County after many years of dealing with personal tragedies, such as the deaths of 3 of his wives and the divorce from his fourth wife, as well as the death of an infant son. He did have 2 children by his third wife and 1 son by his second wife.

Dr. Higley married a 5th time to Sarah Clemens at Smith Center on March 8, 1875, and they had four children, one of whom died as an infant.

Dr. Higley wrote poetry and while was between his fourth and fifth marriages, he lived in the cabin he built along the Beaver Creek. It was constructed a cabin of logs and limestone and was built in 1872. A person visiting him found the poem "My Western Home" and suggested that Dan Kelley of Gaylord be asked to write the music. Dr. Higley took the poem to Mr. Kelley and the song "Oh, Give Me A Home Where The Buffalo Roam" was created.

More Information on the History of "Home on the Range"

This town was organized on January 7, 1888 by the Rock Island Railroad as it moved west of Smith Center.

Established as a post office on February 16, 1876 at a location four miles southeast of the present location. The Rock Island Railroad missed the towns of Salem and Lebanon as it came through the county in 1879. A new location for Lebanon near the tracks was laid out, and businesses and houses were moved to the new location from both Lebanon and Salem.

Settled in 1870, it became a trade center and post office for the northeastern part of the county.

The Charles G. Schwarz family immigrated to the United States from Grauenhagen, Michelenburg, Germany; Mr. Schwarz came in 1873, then returned to move his wife and son to America in 1876. They came to the northern part of Smith County in 1877. Mr. Schwarz planned to build a flour mill in "Sod Town" which consisted of a frame store and three houses, a school and a blacksmith shop all made out of sod. Because of the lack of water in Sod Town, the timbers for the mill were moved to the present site of Reamsville, and the town of Sod Town was also moved. In 1882, the name was changed to Reamsville.

The mill was built beginning in 1882. "The eight posts were 12 inches by 12 inches and about 40 feet long. The mill was octagon in shape, forty feet in diameter at the bottom, tapering to eighteen feet at the top. The height to the turntable as forty-two feet and to the top of the roof was fifty-four feet from the foundation stone. For harnessing the wind a huge fan was built with a spread of sixty feet. A sail cloth could be spread or taken up as the wind velocity got higher or lower. The tailwind was ten feet in diameter. The building was five stories high and shingled from top to bottom" (pages 217-218 from "A History of Smith County Kansas to 1960".) It became known as the Old Dutch Mill and was moved to a park in Smith Center where it stands after being restored following a fire in 1955.

The ethnicity of most of its settlers is German.

The Smith Center Townsite Company chartered the town site in September 1871. The name Smith Centre was the legal spelling on the charter, but the more common spelling of Smith Center began in 1873. The first building on the town site was constructed in May 1872 and used as a boardinghouse. Other buildings and homes were built that summer and fall, and in November, there was an election for the county seat. Cedarville claimed to have won, but the victory was challenged by Smith Centre. Another election held a year later gave the county seat permanently to Smith Center.