Eminence had its beginnings as a post office named Cuyler in 1883, then it was relocated 2 miles east on the Pawnee River in 1886. The name was changed to Creole, but due to another town with that name, it was officially named Eminence on June 3, 1887.

Another town in Garfield County, Ravanna, had been named the temporary county seat, and in November 1887, an election was held with the winner being Ravanna. Later an investigation found that the ballot boxes had been stuffed with names of deceased voters.

On December 11, 1888, Eminence was officially the county seat. Ravanna challenged it in the state Supreme Court, but it upheld the decision and Eminence remained the county seat. Ravanna citizens once again went to court; this time they challenged the legality of Garfield County because it contained less than the 432 square miles that was required by Kansas statutes. Garfield County was annexed to Finney County, and Eminence began its decline. Today there is not much to show there was a town in that place at one time.

Founded along the Atchison, Topeka & Santa Fe Railroad line by railroad officials in 1872, it was named in honor of Thos. Sherlock, Sr. who was a director of the A T & SF railroad company. Settlers didn't arrive until seven years later when people came from the east to purchase government land. By May 1879, Sherlock had a store, a lumber yard, a restaurant, and in July, a saloon was opened for business. The town flourished for several months, but when Garden City made an offer for the citizens to move to their town, free of charge, many citizens took up that offer.

But Sherlock began building back up and on December 6, 1883, a post office was established; it was discontinued on March 27, 1890 with mail coming from Dodge City.

In 1910, the post office was re-established with a name change to Holcomb, in honor of D. C. Holcomb, who had been active in developing that area.

These pictures were taken by Lyman Wooster during a visit to the Holcomb Consolidated School sometime in the early part of the 20th century. Mr. Wooster was a professor at Fort Hays Normal School and later became president when the name of the school was Fort Hays State College. 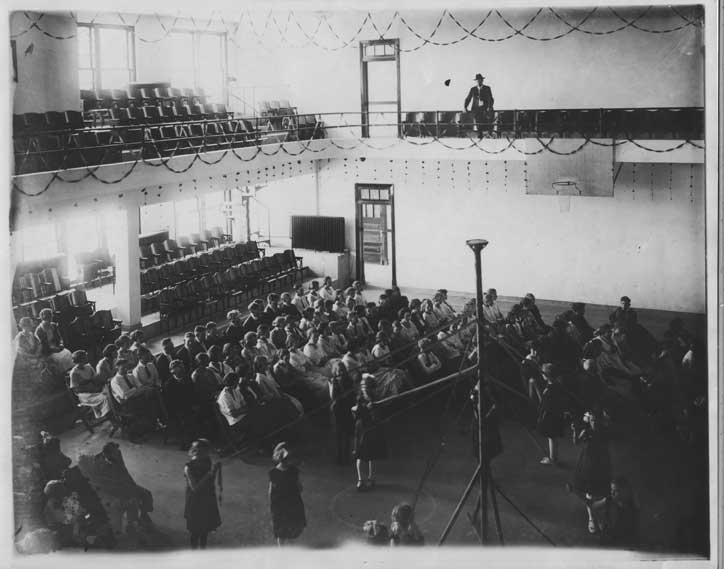 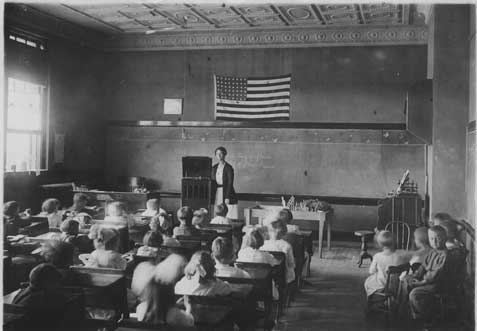 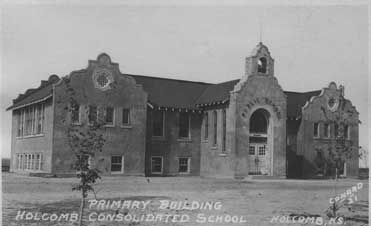 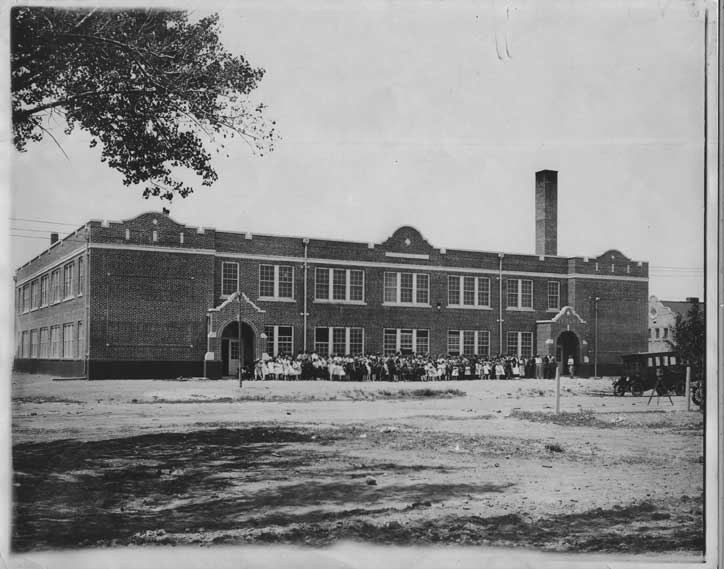 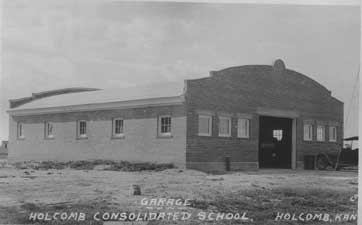 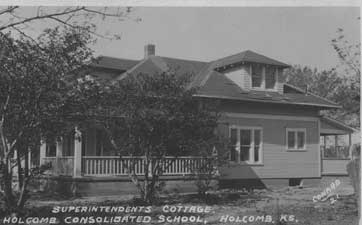 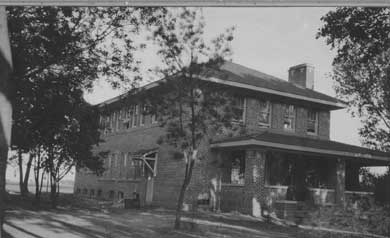 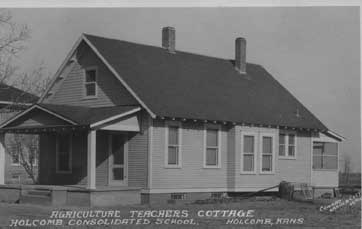 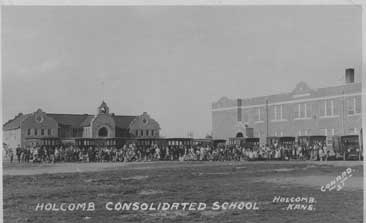 Finney County started out as several counties that were never organized. Later, after it was established, a new county with the name of Garfield was created using some of its townships; Garfield County was declared unconstitutional six years later. Finney County was named in honor or Lieutenant Governor Finney who was from Woodson County.

The first settler of the county, John O'Loughlin, made his home in what is now Lakin in Kearny County in 1873.

Sequoyah County was created in 1873 by the Kansas Legislature and was attached to Ford County as a township for judicial purposes. Arapahoe County was directly south of Sequoyah County and the Cimarron River ran through the county's southeast corner. (There was another Arapahoe County which was a little bit further north, and its territory covered some of what is now eastern Colorado to the Rocky Mountains in the Kansas Territory.) Buffalo County was also created in 1873. Between 1873 and 1887, the surrounding counties of Hodgeman, Finney, Gray and Lane received sections of Buffalo County.

In 1883, the Kansas Legislature created Finney County from the unorganized counties of Sequoyah and Arapahoe and parts of the unorganized counties of Kearny, Grant, Lane, Gray and Meade. In 1885, the southeast part of the county was returned to Meade County. In 1887, six townships from the northeast corner of Finney County and six from the northwest corner of Hodgeman County were used to create Garfield County. Shortly afterwards, a county seat war began between the towns of Ravanna and Eminence. Eventually Garfield County became Garfield Township of Finney County on March 7, 1893, due in large part to the county seat war. It was declared unconstitutional and its organization was voided.

There was a Jewish colony located in Garfield County east of Ravanna called Beersheba. (See Hodgeman County  for information). It was one of several Jewish agricultural colonies in America and one of seven in Kansas. By 1890, however, most of them had left the county. It was founded in 1882 by Rabbi Issac M. Wise of Cincinnati. Another Jewish colony, Leeser, was founded in 1886 by Russian Jews.

The area of land on which Garden City was later platted was homesteaded by C. J. (Buffalo) Jones, John A. Stevens, and the Fulton brothers, Jim and Billy in the late 1870's and early 1880's. Garden City was incorporated on January 13, 1883.

Originally located two miles east and one and one half miles north of the present town site, Kalvesta was founded in 1887 by a town company. It had a lumber yard, newspaper and a post office within its first few years of existence.

The reason for moving the town is likely attributed to the railroad planning to build tracks through the area from Jetmore to Garden City; however, like several other towns in western Kansas, those plans never came to fruition.

John O'Loughlin, the first settler in Southwest Kansas, established a store in a dug-out in February 1873. It was located on the Santa Fe trail, and Mr. O'Loughlin had a booming trade with the freighters. A post office was established in the fall of 1873, and the town site was platted in 1882. Its namesake was a director of the Santa Fe railroad. Lakin was Finney County when it was established in 1884, and after the boundaries of the counties were moved, the town was in Kearny County in 1887.

Founded in 1886 by Russian Jews, Leeser was named for Rabbi Isaac Leeser who was the editor of a popular Jewish magazine "Occident". Leeser was very close, if not in distance, to its counterparts in Touro. Many colonists of both towns had relatives living in the other town. The colonies were 10 to 12 miles apart in 2 separate counties. Leeser was the smaller of the two, and its fortunes were riding on the coattails of Touro.

After dealing with a blizzard in 1886, a tornado that caused some damage in 1887, and a drought that started in 1888, the colonists' attempts at agriculture failed. Along with Touro's failed backing of Chantilly in the county seat war, these things combined dampened the enthusiasm of the colonists. By 1890, Leeser was no longer existent except for a few empty and crumbling sod buildings.

The Western Trail (a cattle trail) played a part in the founding of this town. The Barton Brothers drove a herd of 3,000 cattle over the trail, and the cattle were the first to feed on the government lands in Western Kansas. In the fall of 1872, they came to the area and established a ranch along the Arkansas River. The Atchison, Topeka & Santa Fe Railroad was laying its tracks out to this part of Kansas, and they chose the Barton Ranch as headquarters for the town site. It was named Pierceville in honor of Chas. W. and Carlos Pierce, who were members of the original Atchison & Topeka Railroad company.

The post office was established on June 10, 1873, and the town began to grow with a store and dugouts. Then tragedy struck a little over a year later on July 3, 1874. Indians who had been defeated in a fight in Texas were heading north and were looking for settlements along the Santa Fe Railroad. Once they got to Pierceville, they set fire to the store and chased the train that came through the town firing their arrows at the train and into the windows. It was learned later that this was the same group of Indians who had attacked the German family and killed the parents, a son and a small child before kidnapping the four daughters. The girls were with the Indians during the attack on Pierceville. They were rescued later.

This town went through several name changes after it was founded in 1882 by John Bull. It was originally called Bulltown, after Mr. Bull, but the settlers did not like that name. It was then changed to Cowland which the merchants did not like. Ravanna was the next and final name chosen.

By the time Garfield County was organized in July 1887, Ravanna had become a trading center for the ranchers in the area. Governor John Martin named John Bull as a county commissioner and the commission named Ravanna the temporary county seat. The commission set up an election to be held in November for the permanent county seat. Ravanna had 467 votes; Eminence had 432 votes. A courthouse constructed with native rock was built in Ravanna, and it ended up costing $2,000 more than the $10,000 in bonds and was nicknamed the "Great White Elephant".

Citizens of Eminence started an investigation of the election and found that a construction crew, using the names of the dead men, had voted and none of them were citizens of Ravanna. The attorney's general's office deducted 60 votes from Ravanna, and Eminence became the county seat on December 11, 1888.

The State Adjutant General was sent to the area and persuaded the two towns to hold off on declaring the county seat until the court met in September, 1889. The final judgment gave the victory to Eminence.

A surveyor hired in 1892 by Ravanna citizens found that the county did not meet the required number of acres that it needed to be organized legally. In the autumn of 1892, this finding was upheld in the court which declared Garfield County illegal. The state legislature annexed Garfield County to Finney County in the spring of 1893.

The county annexation was a blow both to Eminence which had a population of 300 and to Ravanna. Both towns lost their bid for the county seat, and people began moving away, closing businesses and leaving farms.

The Kansas Pacific Railroad's plans to put in tracks from Ravanna to Dodge City did not come to fruition. These decisions ultimately led to the demise of Ravanna. Today there are only a few foundations that lay where a town once was home to several hundred people.

Harris, L. David. "Lest We Forget Beersheba". The Wichitan, February 1981.