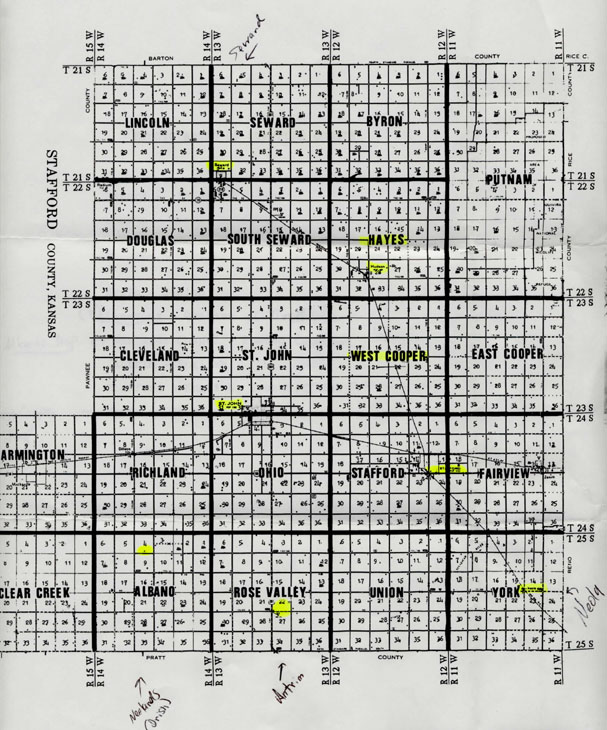 There were two German settlements in Stafford County also. One settled in West Cooper Township and started the Calvary Baptist Church, which is still in existence. The other settlement was in Hayes Township and the town of Hudson.

West Cooper Township was the site of the town of Bedford, which tried to become the county seat of Stafford County. The town was called Center when it was founded in 1879, but the name was changed in 1881 to Bedford. At one time, the town had a population of 60 people, but now all that remains is the cemetery. Claus Feldhut, a German immigrant, owned the land and wanted to use it for the town. He sold lots, but when the town was abandoned, he gave the people their money back. Bedford was vacated in 1899.

Hayes Township was settled mainly by German families. Some of the families had been farming north of Stafford in the Bedford Township, but moved to the sandy region of Sandago for better farming opportunities. Sandago was comprised of the Hayes, Byron, and Seward Townships.

The German settlers founded two churches-the Salem German Methodist Episcopal Church in 1884 and the German Evangelical Peace Church in 1885. The congregation in Salem did not last very long, and the building was eventually moved to Hudson. The Peach Church was the only church in the township until 1914, when members of the congregation living in Hudson formed their own church which was called the Trinity United Church of Christ.

Two different groups, one religious and one ethnic, settled in the Ohio Township. The religious group was a dissident branch of the Church of Jesus Christ of Latter Day Saints led by William Bickerton established a city called Zion Valley north of St. John in 1875. Mr. Bickerton, born in England, had formed the branch in Pennsylvania and came to Kansas to find a God-chosen area for his church.

A member of the Bickerton Church of Jesus Christ, Calvin Glasscock, parted from this branch and donated a large hill that he had purchased to the Utah Mormons. This group then purchased the German Baptist church building, and they moved it to a new location in St. John. The Utah Mormons then established their own headquarters in St. John in a hotel they built for their offices and living quarters. This operation did not last long, but their church continued by taking members from the Bickerton colony. The Utah Mormons built their own church in 1899. The Mormons moved to Pratt, Kansas, in 1968, and the Bickerton church was allowed to regain their original hill and the site of worship that they did not have for seventy years. For many years, two different groups of Mormons lived in Stafford County.

African-Americans homesteaded on several different sections of the township. The highest number of African-Americans living in Stafford County has been estimated to be 400-425 in the year 1914. They established the Martin Black cemetery named for a family of settlers in the area named Martin. This cemetery still exists. The African-American people became members of the African Methodist Episcopal Church and the Baptist Church located in St. John. These churches had been founded by African-Americans who lived in town.