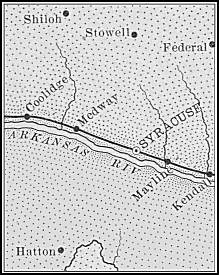 The Santa Fe Railroad had a division point located in Old Granada and they moved it to Coolidge in 1881. The town began to grow, and by the following year, Coolidge had houses and stores that were being built. 1886 and 1887 saw the town grow rapidly with a population of 1800. There were 3 lumber yards, 3 dry goods businesses, 5 eating places, 7 grocery stores, and even an opera house that burned down shortly after it was completed. There were also several newspapers that kept track of the news of the area. Two large merchandising firms, Otero and Sellers and Chick Brown and Company, were both located in Coolidge.

After an election for the county seat in April 1886, in which Syracuse claimed it won, it was determined that Syracuse used fraudulent names including the names of people from Shawnee County, Kansas and Mills County, Iowa. On May 31, 1887 an election was held and Coolidge received the majority of votes with the endorsement of the citizens of Kendall.

Kendall was still the temporary seat as the Kansas Supreme Court continued to hear cases on the county seat war through February 1888. In April, 1888 the court determined that no town had been legally chosen the county seat, so Kendall remained as the temporary county seat. Another election was held June 20, 1888, and Coolidge was the winner; however, in July the U.S. Land Office issued a document proclaiming Syracuse as the permanent county seat. Records and office equipment were moved from Coolidge to Syracuse on November 16, 1888.

A roundhouse that could hold 27 engines and a Harvey House were in place by 1886, which is when the city was incorporated.

Syracuse became the home of the railroad division in 1902, and by 1910, the population of Coolidge was less than 250.

Originally known as Aubrey (an old fort named Aubrey was located nearby - it lasted about 1 year), the town of Kendall began as a railroad stop. Five people settled here in 1879 and founded a trading post. A post office opened the same year and had the name of Zamora in the town of Aubrey. In 1885, the name was changed to Kendall for both the town and the post office.

The Arkansas Valley and Land Company platted the town in 1885 and it grew from 10 houses to 200 houses in 4 months. Kendall became a temporary county seat after an election in 1886, but after a long drawn out county seat war that lasted until late 1888, Kendall was no longer a contender for the county seat.

Hamilton County was created on March 6, 1873, when an act of the Kansas Legislature was passed. A census, taken earlier in the year, showed that there were 1893 people living in the county. The Governor issued a proclamation on January 29, 1886 which declared that Hamilton County was officially organized. At that time, the boundaries included what is now Stanton County, a strip of land 12 miles wide each in what are now Kearney and Grant Counties.The present boundary is the same as the original boundary in 1873.

Settlers had begun arriving in the 1870's, but the 1880's saw a number of families come from Iowa, Ohio, Illinois and Eastern Kansas with the last settlers coming in 1907-1908. These settlers were several Mennonite families from McPherson and Marion Counties that came to Hamilton County, and settled in the southeast part of the county. This was known as the Menno community, and a church was built, but due to their disappointing years of farming on the land they bought, they began to leave within 3 years.

People came to the area in the 1870's and 1880's because the railroad had land for sale. Hamilton County had over 1 million acres that were subject to homestead, preemption and timber claims. The railroads advertised these lands all over the East Coast as prime business and agricultural opportunities.

A group of people from Syracuse, New York, decided to come and check out the lands that were being advertised because they wanted to find a place to establish homes. E. P. Barber, D. C. Auckland and S. R. Jones arrived in Dodge City only to find that passenger service had not yet been established. They rode a railway work train from Dodge City to Hollidaysburg, the present site of Syracuse. It was only a whistle stop at that time and named after the President and builder of the rail line. It later became known as Syracuse.

E. P. Barber and his family were among the first inhabitants of the new colony who left New York on March 8, 1873, to travel to western Kansas. Over the next few months, dugouts and soddies were built as homes for the settlers. E. P. Barber's house was a frame house which was used as both a residence and a place of shelter for people to go to in case of an Indian attack. Although there were scares, there were not any attacks made on the townspeople.

The population reached its peak in 1888 with 1200 people, but over the next ten years, the population dropped to 343. However, probably due to the fact that the Santa Fe roundhouse was moved from Coolidge to Syracuse in 1902, the population had come back up to 1300 by the year 1910.