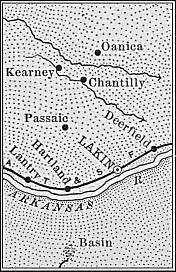 Founded in 1886, along with Leeser in Finney County, Toruo was in north central Kearny County. Leeser was 10 to 12 miles east of Touro Colony. Touro was named for a prominent American Jewish leader named Judah Touro. Mr. Touro lived in New Orleans and had given his fortune to Jewish schools, hospitals, synagogues, and orphanages.

The colonists came in the midst of a land rush to Kearny County which had started in late 1885. After building sod houses, the colonists planted corn and sorghum, and talked with their Gentile neighbors of building an irrigation ditch from the Arkansas River which was south of there about 15 miles.

Unfortunately Touro got caught up in a county seat war. Since it was close to the center of the county, several towns popped up within 1 to 3 miles of Touro, all vying to become the county seat. In 1886, the post office that was established in Touro was named Myton. That was relinquished to Chantilly which was the largest community with 200 people living there at the height of the Kearny County war. Because of its proximity, the Touro Colony was backing Chantilly in its fight for the county seat with Lakin.

After an election in 1887, Lakin supposedly won, but fraud was charged and it was only after the courts intervention that Lakin was named the official county seat ...which turned out to be temporary. Another election was held in 1889 at which Hartland won. But the Jewish population had lost interest after Chantilly lost in 1887 and a bad drought hindered the colonists in 1888. By 1890, both Touro and Leeser were nonexistent. After lands were opened in Oklahoma in 1889, many of the colonists left Kansas to go to the Sooner state.

The Atchison, Topeka and Santa Fe Railroad (ATSF) got a federal land grant in 1864 to build a railroad and get it to the Kansas-Colorado border by January 1, 1873. They barely made it by finishing the rail line on December 28, 1872. The county was blocked out and named by the legislature the following year (1873), but was not officially organized until March 27, 1888.

The first permanent settler in the county was John O'Loughlin, born in 1842 in Ennistymon County, Clare, Ireland. He came to the United States with his mother and two siblings in 1850 and settled in Iowa. While serving in the Grand Army of the Republic Quartermaster Corps as a wagon master under General George Custer and Philip Henry Sheridan, O'Loughlin began a trading post and toll bridge over the Pawnee Creek on the Fort Hays-Fort Dodge road. After the ATSF had completed its line, O'Loughlin decided to look for another location for his trading post. The site he selected in 1873 was halfway between Dodge City, Kansas and Granada, Colorado. He named it Lakin after an ATSF railroad trustee, David Long Lakin.

Among the settlers were a small number of Danes and Swedes. In 1885-1886, there were 13 men who purchased claims, among them brothers Hans P. and Rasmus P. Eskelund and their brother-in-law Louis Hoi. Their families joined them in January 1886, but Louis Hoi and family returned to New York after three years. A Swiss family settled northeast of Kendall in 1906.

In 1905-1906, a colony of Mennonites from Harvey, Reno and McPherson Counties in Kansas settled in the southwest part of the county and the southeast part of Hamilton County. The Menno post office was established and a couple of churches were built, as well as a store and a blacksmith shop. However, by 1912, only about a dozen families remained, because the dry years lead to discouragement in farming the western Kansas land. Many families returned to eastern counties they had come from.

A Jewish Agricultural colony was founded in Kearny County in 1886. It was called Touro.