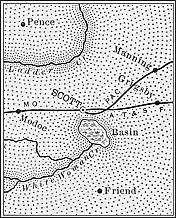 The site of Grigsby was platted on October 4, 1886. In 1887, the Santa Fe Railway built its tracks through the town site, and the station opened in September of that year. Grigsby's name was changed to Grigston in the early 1920's.

When the Missouri Pacific Railway made its final survey in 1887, a town site was established next to the tracks. The area was platted and given the name of Manning. It was named after a cabinet officer of President Grover Cleveland.

The town site was purchased by the Atchison, Topeka and Santa Fe Railroad company, which then surveyed and platted 200 acres into town lots. The ATSF and the Missouri Pacific Railroads both built large depots and stockyards to work with transporting livestock.

The town was located on a hill two miles north of the Finney-Scott County line. The town did not last long, but the hill became known as Painter Hill.

This town site was platted on October 27, 1886 with the hopes that the Missouri Pacific Railroad would build its tracks westward through the area. However, the tracks were angled southward towards Scott City from Healy. It did become a thriving town with various businesses such as a livery stable, a hotel, a bank, a church and a newspaper. On June 3, 1915, the Pence Church and the town were destroyed by a tornado.

Like all of the counties in Kansas, Scott County's first inhabitants were nomadic plains Indians. The Indians that were known to be the first permanent dwellers are the Picurie Indians who came from New Mexico's Taos area. They settle near Beaver Creek in a pueblo which was established about 1604 and became known as El Quartelejo, the only Indian pueblo in Kansas. Eventually the Picurie Indians returned to their native New Mexico, and El Quartelejo is believed to have been used by Frenchmen as a trading post prior to 1724.

Scott County was the site of the last Indian Battle in Kansas which took place in September 1878 between the northern Cheyenne and the cavalry. Chief Dull Knife was leading a band of Cheyennes to Yellowstone from Oklahoma when military troops became aware of their presence. The troops met up with the Indians in the canyons along the southern edge of what is now Scott County State Park. Little Wolf led the battle for the Indians while Col. Lewis led the troops; Lewis was killed in the battle. The Cheyennes continued on to Yellowstone after slipping away during the night.

The Kansas Legislature created Scott County in 1873, and it was named in honor of General Winfield Scott. General Scott was commander-in-chief at the beginning of the Civil War and was also a veteran of the War of 1812 and the Mexican War. Scott County did not have any population for 11 years after the county was created.

The settlement of the county began in 1884 when people came from the east to seek homesteads that were being advertised by the government. A patent for the land could be obtained by the homesteader after living on and improving the land for 5 years. Mrs. M.E. DeGeer and her daughter, Mrs. Eastman, became the first permanent settlers in October 1884. By 1885, there were 91 people living in Scott County and many of them came to the area from Illinois, Iowa and Missouri.

Shallow Water was founded by Quakers who wanted to start a school for their children.

Three men and a woman began the Town Company and laid out a town site by March of 1885. Mrs. DeGeer, Mr. Swan, Mr. McLain and Mr. Case each donated 40 acres to begin the town site which was known as Scott Centre. It later became Scott and finally became known as Scott City in 1913.

The Town Company filed a charter on September 11, 1885. More than 50 buildings were built in the 90 days afterwards. The Town Company offered a free lot to anyone that would build on it. They also donated lots for the first church in Scott City to be built; the Methodist Church was built in 1886. By 1902, Scott City had a bank, four general stores, a high school, a drug store, a lumber yard, an opera house and several churches, along with the Missouri Pacific and the Atchison, Topeka and Santa Fe rail lines.

Shallow Water was founded in the early 1900's by Quakers who wanted to provide an institute where their children could learn in a religious setting. It later became the grain headquarters for the southern part of the county due to two grain elevators that were built along the Missouri Pacific railroad line.

During the years of 1886 and 1887, the Michigan Township in Scott County was settled. The town of Zenobia was founded in the fall of 1886. There was a general store, a post office, a livery stable and 4 residences. The school house was built in the fall of 1887. The town did not last long; by 1891, it was abandoned.