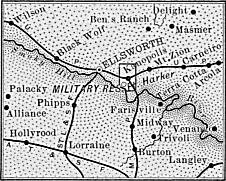 Located in the extreme southwestern part of the county, Cain City was founded by a group of Canadians. The Missouri Pacific Railroad was wooed by the citizens to build a rail line, but it decided to build the line in Rice County. Cain City moved to Rice County along the right-of-way, but it did not survive. A cemetery is all that remains where the original town site was located.

The new town site was laid out on the western edge of Fort Harker in 1867. It was on the north bank of the Smoky Hill River. The plat was filed on May 8, 1867, in Saline County, to which Ellsworth County was attached for judicial purposes. The railroad was going to build to Ellsworth, so many people moved to the area in the spring of 1867. Several businesses were built, as were some houses, and the population has been estimated to be around 1,000.

The Smoky Hill overflowed its banks on June 13 & 14, causing a flood with four feet of standing water on the town's main street. The houses and businesses were destroyed, but that did not deter the townspeople. They moved the town site two miles to the northwest. Lots were laid out early in July just as the rails were being laid. The railroad sent its first cars thorough the town site on July 5, and the post office was established on July 17.

Ellsworth also dealt with a cholera epidemic that same year. One of its first victims was the wife of Dr. George Sternberg.

Along the rail lines as they were being built, tent cities popped up, shut down and moved on down the line. Many of the occupants were not of the respectable kind; some were gamblers, others were there to cause trouble. One such city was set up in Ellsworth, and eventually in Hays City, Coyote, Sheridan and Kit Carson.

Ellsworth became incorporated in 1868 and citizens in the surrounding area were dealing with Indian attacks which eventually ended in 1869, and the citizens of Ellsworth were also dealing with frontier violence. The availability of the railroad was the impetus in Ellsworth becoming a cow town in 1871. The cattle trade moved to Ellsworth at this time, and with it came saloons and brothels and gambling joints along with the characters who populated these "businesses". By 1874, there was a new market for the cattle - Wichita - which saved a week's time in getting the cattle to the railroad. Both the Kansas Pacific Railroad and the citizens of Ellsworth did not want to lose the cattle trade, but by 1875, Ellsworth was no longer an important cattle market. The citizens then turned to agriculture and began advertising the county as a prime area for setting up homesteads. Soon settlers were moving to Ellsworth County and founded other towns in the county.

Originally thought to be spelled Hollyrood, this town was founded by Canadians of Irish descent in 1876. The name was Holyrood by 1888. The story goes that a sign painter left off one L when painting the sign for the train depot.

This town site was founded by Professor E. C. Janzen and Henry Strassen of illinois. Mr. Janzen saw his dream of starting a German Baptist colony become reality in 1877. They signed an agreement with the Kansas Pacific Railroad that reserved about 11,500 acres for the colony. They had until March 31, 1877 to sell 10 sections and were able to make that deadline. The railroad donated 80 acres to be set aside for church purposes.

The first stone church was built in 1879, and a larger frame church replaced it in later years.

The railroad station was built in the area in 1868 and was named Wilson. The town founded in 1871 was named Bosland, but people were calling it Wilson after the railroad station. Soon the town was known as Wilson. A store, a lumber yard and a schoolhouse were soon part of the town and houses were built to accommodate the number of people arriving to live in the area.

The first group of Bohemian settlers who came from Nebraska were among the first settlers in the area.

Several roads were built in the area comprising of what is now Ellsworth County to accommodate travelers that were going through the region and to assist military troops in getting to where they needed to be during a time of Indian troubles. The first such road was built in 1854 by the War Department from Fort Riley to the mouth of the Walnut Creek. Another road, built in 1860, became a major route during the Pikes Peak Gold Rush.

The first settlement was made as early as 1860 by a group of gentlemen from New York, Michigan, Germany and Mexico.

A fort was established in 1864 to protect the railroad workers and settlers from Indian attacks. The site of the fort was on the north bank of the Smoky Hill River where the road from Fort Riley crossed it. General Curtis selected the name of Fort Ellsworth to honor its commander, Lieutenant Allen Ellsworth. A new site for the fort was selected in 1866, and it was a mile northeast of Fort Ellsworth and was on higher ground. The name was changed to Fort Harker on November 17, 1866 in honor of Brigadier General Charles Harker who was killed on June 27, 1864 at the Battle of Kenesaw Mountain. The old fort's buildings were abandoned and torn down.

The town site for Ellsworth was laid out on January 23, 1867, and the State Legislature defined the county's boundaries on March 3, 1867. Later in the year, on May 8, the plat was filed in Saline County. Ellsworth County was attached to Saline County for judicial and municipal purposes. A flood wiped out the town site on June 8, so a new town site located two miles northwest of the old site was laid out. It is the location of the current town.

In May 1874, a caravan of wagons carrying Bohemians who were under the leadership of Francis Swehla came to Ellsworth County. They set up a Bohemian settlement in the Bosland (later Wilson) area. Other Bohemian families came to the area in response to Swehla's articles in Bohemian-American papers. Jan Charvat built the first Bohemian Hall in May 1880 in Wilson.

Holyrood was founded by Canadians of Irish descent. Cain City was also founded by the Canadians. The Bohemians established Palacky in June 1876 north of Cain City, but it never became a town.

German Baptists settled in the area around what is now Lorraine.

A Short History of Ellsworth County

This essay was handwritten by Mrs. Inez Essick in or around 1911. The original handwritten papers are located in the Ellsworth County vertical file in the Special Collections room of Forsyth Library. Patty Nicholas, head of Special Collections, translated the essay into typed text in January 2006. Mrs. Essick's handwriting was illegible at times, so some places in this text have blanks. There were some names that the translator was unable to decipher, so the spelling of some of the names may not be right. The grammar may not be as punctual, either, as the translator typed the notes, as is, in most cases. There were some commas added in places where Mrs. Essick did not have them. If you have any questions or corrections, please contact the Special Collections room.