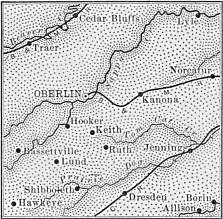 The Rock Island Railroad established the town of Dresden in 1888. It was located 16 miles south of Oberlin. Dresden was soon growing rapidly with a drugstore, a bank, a hotel, and several grocery stores.

The depot was a major starting and ending point for travelers from other towns in the area, as they had to go to Dresden to get on the train that would take them to Kansas or Denver. By 1910, the population was 325.

The Rock Island railroad shut down the depot in 1960 which began the decline of the town.

The Warren Jennings family came to the southern part of the county in 1873 from Iowa and homesteaded about a mile northeast of the present site of Jennings. They started the Slab City trading post, and a post office was established within the store on October 22, 1874. The trading post was used mainly by buffalo hunters, settlers, and even a few friendly Indians.

In 1879, the O. E. Munson family homesteaded the land on which the town of Jennings was founded. By 1888, the Rock Island Railroad came across the southeast corner of the county, and the town site was laid out. It was named for Warren Jennings. Houses were moved to Jennings from Allison, and citizens of Slab City also moved to Jennings. The railroad laid tracks through the town on May 16, 1888.

In April 1893, a group of settlers of Czech heritage came to the Big Timber area in Decatur County. Big Timber is a tributary of the Prairie Dog Creek.

Founded as a post office on September 13, 1881, it was called Altory. Anselmo B. Smith platted the town site, located 10 miles of Oberlin, in 1885 and called it Kanona. The town had a hardware store, a barbershop, two general stores, and a hotel. By 1910, the population was 125. By 1920, Kanona was a shipping point along the Chicago, Burlington, and Quincy Railroad line. A stockyard and two elevators were built near the tracks.

Several fires in the 1920's destroyed several of the businesses, and a tornado in 1949 damaged the school, lumberyard, and many other buildings in town. Today there is not much left of the town.

Named for Commodore Stephen Decatur who was in command of the warship United States during the War of 1812. He was later in a dual with Commodore James Baron and was killed.

The first record found is that of an expedition crossing Decatur County lead by Fremont in 1843. The county's first settlers came in the later part of 1872 when a group of buffalo hunters came to the Sappa valley on a hunting expedition. By early spring of 1873, Decatur County was receiving an early rush of immigrants. Several town sites were started, but they were soon abandoned.

A number of settlers from Bohemia arrived in the area on April 17, 1873 from Omaha, Nebraska where they had been residing. They were said to be industrious American citizens which was a good quality to have to be a pioneer. Their homes were in what is known as the Big Timber Community. A web page titled "The Czech and German Pioneers of the Big Timber Company" by Harwood G. Kolsy is available with further information on this community.

In April 1874, a town site was platted and surveyed for J. A. Rodehavor, who named it Westfield, which later became the Oberlin town site. Twenty-eight miles to the southwest, several families from Iowa took up claims in what became known as the Hawkeye settlement.

Decatur County was created by an act of the Kansas Legislature in 1873 and the first post office opened in April 1874. The county was organized by Governor John P. St. John in November 1879 and Oberlin was named the permanent county seat.

The site of the last Indian raid in Kansas occurred in Decatur and Rawlins counties in September 1878. Forty settlers were killed by the Cheyenne Indians led by Dull Knife and Little Wolf as they crossed into the two counties. Nineteen of the settlers killed on September 30 were in Decatur County.

The Lincoln Land Company surveyed and platted this town site in 1885. It was located 18 miles east of Oberlin, along the Chicago, Burlington and Quincy Railroad line. Norcatur got its name because of its location close to the Decatur/Norton county line. A post office, a bank, and a blacksmith shop were among the businesses that were built.

The town suffered a loss when the east side was destroyed by a fire in 1886.

The town site was laid out on land owned by J. A. Rodehaver who had the area surveyed and platted in April 1874. The plat was named Westfield. Several families were already living in Westfield - they arrived on September 12, 1873. A post office was established at the present site of Oberlin in 1873 and it was named Sappa. By July 1878, when the town of Oberlin was surveyed and platted in the same vicinity, there was a sod store, a frame store, a log hotel and a log blacksmith shop. Oberlin was named the county seat in 1880.