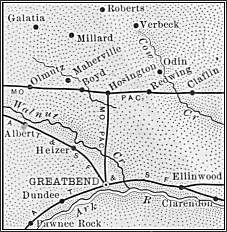 Albert was founded in 1886 after the Walnut Valley & Colorado Railroad laid tracks from Great Bend to Scott City. (NOTE: The Atchison, Topeka and Santa Fe Railroad took over this line a short time later.)

The town site was platted on June 19, 1886, but on July 1, 1889, a petition was filed to vacate the unused portions of the original plat. The town was reduced to the size it is presently. A post office was established at Albert on August 22, 1887.

Named after Albert Kraisinger, a native of Bohemia in the Austria/Hungarian Empire, the Albert town site became home to settlers from Austria, Prussia and Wurttenberg. Most of them were farmers, but other were laborers of other types such as millers, carpenters and shoe makers.

People began settling in the area south of the present site of Claflin in 1872. Many of these settlers were from the northern states, Movaria and Germany. By 1886, the Kansas and Colorado Railroad (later became the Missouri Pacific) had laid tracks through the area and the depot built south of the tracks was named Giles City for the owner of the land next to it. The main line was completed on February 21, 1887.

The Claflin Town Company was formed in 1887 with Stelle Giles as president. They wanted to buy the land south of the tracks, but A. Giles would not sell it, so the group bought 160 acres north of the tracks and changed the name to Claflin in March 1887. The name came from the maiden name of the wife of Judge O. P. Hamilton, one of the members of the town company.

George Norris built the first building in the new town; he put in a furniture and hardware store. A dry goods and grocery store was opened by Joe Cannon.

Father Warren Emmerich established a school in 1888, which was known as the "new German school" because many of the classes were conducted in German.

The first church in Claflin was the Christian Church, dedicated in March 1892, followed by the Methodist Church in June 1893. The Lutherans were the earliest religious organization in the area, but their church was not built until 1897.

Its settlers were most likely of German ancestry.

Fifteen families of German descent migrated here from Russia to homestead on about 1000 acres in 1875. Their colony was 1 mile east of the town of Dundee. The Mennonites built 15 homes, one for each family, and a school building in the center. This building was also used as a church. Eventually the families sold their homes and bought larger farms in other places.

In the Fall of 1871, Arron Burlison erected a house just east of section 31 (which is now the town of Ellinwood, Kansas), and petitioned for a post office to be called Ellinwood. Captain John Ellinwood was a locating engineer for the A.T.S.F. railway and was camped on the Arkansas River at that time. The railroad reached Ellinwood in July of 1872, the town was platted and lots were put up for sale by the Arkansas Valley Town Company, owner of section 31.

Railroad agent C. B. Schmidt, who has been characterized as the ablest German immigration agent ever to do business in the state of Kansas, earmarked Ellinwood as a German colony. To attract the German speaking populace, Schmidt and the A.T.S.F. distributed brochures, printed in German, in every German-speaking community in the United States, as well as traveling to Europe over a dozen times to recruit and usher ships full of Germans to the United States and on to Kansas. The first settlers were English speaking but Schmidt's efforts soon paid off and Ellinwood was known as a German community for the next hundred years. 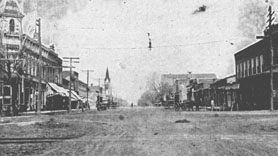 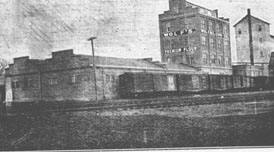 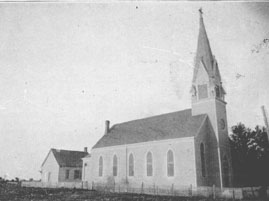 Established first as a homestead township in 1876, settlers began to arrive to farm the land. In 1886, the Colorado-Kansas (later Missouri Pacific) Railroad was building tracks in the area, and the local settlers formed a group to purchase land for the purpose of creating a new settlement.

The new town, situated 10 miles north of Great Bend, was named after Andrew Jackson Hoisington, a businessman in Great Bend. After the railroad came, Hoisington became a shipping point for horses and cattle. A stockyard, three livery stables and as many as eight saloons and seven gambling houses were built as the town grew. It became the second largest town in Barton County.

Founded in 1885 by David C. Barrows who laid out the town site. It was called Four Corners, and when Henry G. Weber, who was from Galatia, Illinois, settled in the town, he renamed it Galatia.

The first building was a United Brethren church. The Santa Fe Railroad came through with its tracks in 1916, and for a short time, Galatia was growing with the addition of three grain elevators, a bank, a lumber yard, and three general stores. By 1921, the town's population was 202, but by 1980, the population was only 60.

The first people to settle within this territory in 1870 were J. Renake, and H. Shultz with their families. A year later in 1871, W. W. Halsey, Charles Rowdebush, E. D. Dodge, Thomas Stone, Edwin Tyler, and other settlers came to reside within this territory. The ethnic backgrounds of the settlers who resided within Barton County were of German, Czech, Bohemian, and Russian descent. Russian settlers arrived within Barton County in the years 1874 and 1875, with many more settlers from different ethnic backgrounds coming in the years after.

William G. Cutler’s History of the State of Kansas first published in 1883 by A. T. Andreas, Chicago, IL.

The Great Bend Town Company founded the town site of Great Bend in 1871. The town name was chosen because of the big bend of the Arkansas River at the site.

A hotel and several houses were built in 1871, and after the railroad came through in 1872, the town grew rapidly. Great Bend won the county seat after an election was held in the fall of 1871. Great Bend is the largest town in Barton County today.

The Atchison, Topeka and Santa Fe Railroad had begun work on laying tracks in Barton County in the 1880's. A demand for some towns to be located along the line created the town of Heizer to the northwest of Great Bend. It, like the other towns in the northern part of the county, never really did have a boom period.

Peter Brack, his brothers and their mother, along with a number of native Austrians, located here and began the task of forming a settlement. The town was laid out in 1885 and became the trading center for Austrians who settled there. The Missouri Pacific railroad had tracks that ran through the town which is located 10 miles west of Hoisington.

An area containing a rock formation which was originally called Rock Point, Pawnee Rock received its present name from a legendary battle between the Comanches and Pawnee Indians. In the 1800's, the Santa Fe Trail was created and Pawnee Rock became a landmark for travelers along the trail.

After the Civil War, a group of fourteen young men from Kentucky came to Russell, Kansas which was the end of the line for the railroad at that time. The men walked fifty miles and laid claim to land at Pawnee Rock. They laid out the town site and also built a house and dug a well.

The Atchison, Topeka and Santa Fe Railroad built its tracks to Pawnee Rock, reaching it on July 14, 1872. A hotel was built in 1872, and by 1878, there was an elevator and a flour mill. Many of the buildings were constructed of sandstone from the nearby rock formation, and several of those buildings remain standing today.

The rock itself was preserved after a state park was created in 1912. 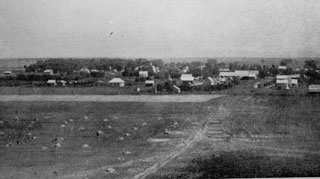 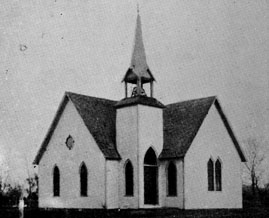 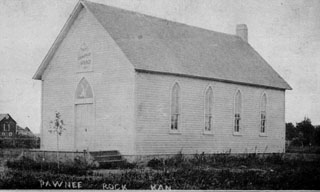 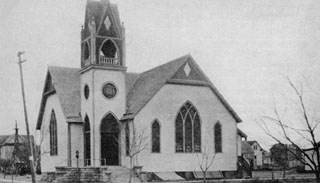 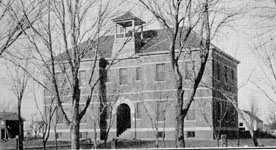