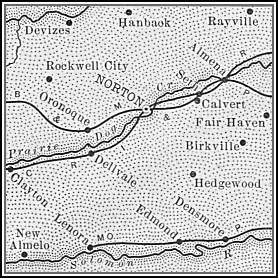 The town site was established in 1877 south of Prairie Dog Creek, and it was moved in 1885 after the Chicago, Burlington & Quincy Railroad built its tracks on the north side of the Prairie Dog. The Lincoln Land Company platted the new town on June 15, 1885 and filed the plat on July 7, 1885.

Settled by the Bieber family in 1875 and later platted by the Kansas Town and Land Company on January 16, 1888, the town site was originally known as Neighborville. The name was changed to Set, then to Calvert. It was on both the Rock Island Railroad and the Burlington Railroad lines, which was productive in hauling the silica that was mined just south of the town.

The original town was established in 1879 one mile north of the present town site. When the Rock Island Railroad came through, the town was moved to be near the railroad. It was platted on March 7, 1888 by the Kansas Town and Land Company.

The town site was platted as South Oronoque on September 17, 1888, by John K. and Phoebe Gray and they filed for record on September 18. It was a trading center, like its neighbor, Oronoque, and it was located on the Rock Island line.

This settlement was founded and laid out in 1874 by John T. Densmore. The town site was platted on April 13, 1881. Some of the early settlers were from Holland and Ireland, having lived in other states before they came to Kansas.

The town site was platted on August 7, 1889 and filed on January 4, 1890. A mill was built nearby to grind flour and meal for the farmers. It remained a trading center and never grew big enough to incorporate.

A Dunkard Colony was organized by a group of Dunkards after they came to the area from Iowa. A Dunkard Church was organized in May 1879 by a group of people from Maple Grove, Iowa. These settlers were German Baptists, and the church was known as the Maple Grove Church. There was a division in the congregation around 1890 which resulted in a "progressive" congregation known as the Brethren and the old line Dunkards, who later became known as the Church of the Brethren. The latter group built a new church 1 1/2 miles from the old church in 1893.

Originally named Spring City, this town was formed in 1874. The name changed to Lenora in 1876, because their post office, located two miles west, was named Lenora. The town was platted on June 28, 1879. James Gilleece, born in Ireland in 1834, settled in the area west of Lenora with his wife, Mary Dunlap Gilleece in 1873. The James Dunlap family also settled there. These two families were among the first settlers in this area.

The ethnicity of its settlers included the Irish.

Located about 6 miles southwest of Norton, this town site was settled in 1873. The town was platted and filed on June 5, 1879 by I. N. Cope. It was originally known as Weston, but when the townspeople petitioned for a post office, the officials refused to name it after the town because Weston was already taken by another town in Kansas. the name was then changed to Leota after the daughter of Mr. M. A. Morrison, one of the town's founders. Leota was in a hotly contested venture between 1875-18778 to become the county seat, but eventually lost that to Norton after people tired of the long struggle. Even though Mr. Cope platted the town site after Norton became the county seat, some of the buildings were moved to Oronoque. Eventually, the settlement was vacated on July 3, 1882.

Norton County was first settled by Civil War veterans in the early 1870s and the population was relatively diversified. Most of the early settlers were of Scotch, English, or Irish background and probably at least, second or third generation Americans. Within the next few years German Catholics did settle around New Almelo in the southwestern corner of the county, probably due to the presence of a Catholic church. However, the church had been started by Canadian immigrants, some of whom were of French ancestry. A former New Almelo priest who wrote a brief history of the parish in the early 20th century called it "the French community." Today, though, you would be hard pressed to find any signs of French influence there.

In southeastern Decatur County a sizable number of Czech immigrants settled around Jennings and some lived near the Norton-Decatur county line in the Clayton vicinity. Some attended the Catholic church in New Almelo. On the western border of Phillips County, a number of Dutch settlers settled in and near Prairie View with some living in eastern Norton County. Norton built a large Catholic church, but also boasted Methodist, Lutheran, Christian, and Episcopalian churches offering further evidence of diversity. There were also settlers that were of Irish ancestry who settled in this county. Rockwell City was founded by the Dunkard Brethren.

German Lutherans settled about 10 miles northwest of Norton and organized a church in April 1907. The church is connected with the Missouri Synod of the Lutheran Church. 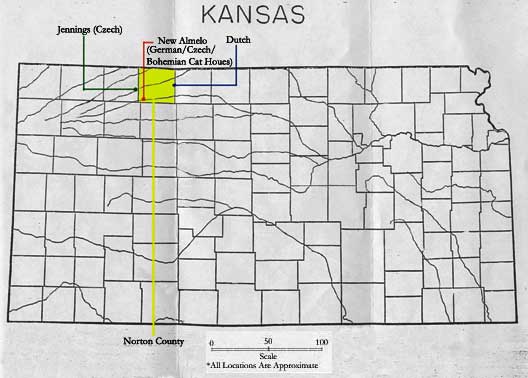 Catholics from Canada homesteaded along the Solomon River in 1873, and the area was known as a "French" settlement for several years afterwards. Beginning in the 1880's, however, Catholics of German and Irish descent were the more dominant ethnic group.

Settlers that were living on and near the present site located the town of Norton in 1872. They used the name of the county for the town because it would probably be a big help when it came time to select the county seat. Norton was not platted until December 7, 1878; W. B. Rogers owned land west of the present State Street and he filed a plat of a town site on that land. A little bit later when the claim contest was being settled on Mr. Rogers' land, the Norton Town Association platted and filed land that was east of State Street. This led to a disagreement over the location of the town for many years. Merchants on the Town Association side built their stores with the back door just across the street from Mr. Rogers' plat. Trash was thrown out these back doors onto the front steps of their neighboring merchants in Rogers' part of town.

The town site was platted by the Lincoln Land Company on July 25, 1885, and filed for record on August 10, 1885. After Leota lost the fight for the county seat, the townspeople moved their interests to Oronoque which became a trading center. The town boomed for a little while, but it did not develop into the town the founders had hoped for. It was on the Burlington rail line from Republican, Nebraska to Oberlin.

This town site was laid out and platted by Dr. William Rockwell in 1884. It was located in what was known as the Dunkard Colony. Dr. Rockwell built a general merchandise store hoping that it would draw settlers to the town site. However, Dr. Rockwell died in September 1884, and in the spring of 1885, the Chicago, Burlington & Quincy Railroad built its tracks to the south. Mrs. Rockwell moved the store established by her husband from Rockwell to Norcatur (just inside the Decatur county line) after seeing that the town was not going to become the town that her husband had envisioned. Rockwell City was soon abandoned.