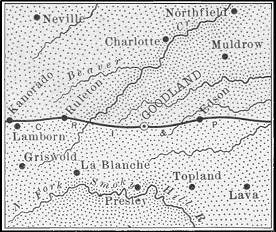 Edson has the distinction of being the last town started in the county, and the last town that was started along the railroad. Albert and Laura Harris named and platted the town which was filed for record on August 10, 1888.

P. S. Eustis and O. R. Phillips organized the Lincoln Land Company which laid out a town in the spring of 1885. Mr. Eustis was an agent of the Burlington & Missouri River Railroad, and the new town was named after him. A post office was established in July 1886.

When Sherman County was organized on September 20, 1886, Eustis was named the temporary county seat. On November 8, 1886, the voters of Sherman County had an election to decide which town would be the temporary county seat with the choice between Sherman Center and Eustis. Eustis won and began constructing a courthouse. Another election was held in the spring of 1887 and Eustis won again.

A county committee met in Eustis on August 23, 1887 for the purpose of setting up an election for a permanent county seat. Voltaire, Sherman Center, and an individual named B. Taylor, who owned land near the center of the county, presented their proposals in front of the committee. Eustis did not so so because the citizens said that when the courthouse was finished, it would be turned over to the county unofficially. But in the next meeting, a new town company from the Goodland town site presented their proposal, and it met with the approval of the town committee. An election was held in the fall of 1887 and the citizens could vote for Goodland, Eustis, Voltaire or B. Taylor. Goodland became the permanent county seat, but the citizens of Eustis were not about to give up their temporary county seat. They had the county records and the court still recognized the town as the county seat. Eventually the officials in Goodland hired a group of armed cowboys who captured a county commissioner and forced him to let them remove the record books, all without a shot being fired.

In a short few weeks after this confrontation, the citizens of Eustis moved the town to Goodland, and Eustis ceased in later years.

Considered to be the first town in Sherman County, Gandy was founded in June 1885. It was named for Dr. J. L. Gandy of Humboldt, Nebraska. He was a land dealer in Nebraska, but his methods of acquiring land were questionable, and he was not very popular as he started buying land in Sherman County. The town of Gandy did not survive, and this may have been a contributing factor.

The Gandy Post Office was established on September 4, 1885. Gandy was also the home of the first newspaper in Sherman County, "The New Tecumseh", which began publishing on November 11, 1885. The first school in Sherman County was also in Gandy. But by early 1886, the town was beginning to decline. The newspaper was moved to Leonard (Itasca) in March, and in the fall the postmaster received permission to change the site of the Gandy Post Office to a new location which happened to be the new town of Sherman Center. The post office remained named Gandy and was the only post office Sherman Center ever had. The town of Gandy ceased to exist.

Goodland was established in August 1887 by the Sherman County Development Company. In late August, the towns of Sherman Center, Eustis and Volaire, as well as the Town Company of Goodland each put forth a bid for the county seat with Goodland being the winner of the votes. Even though Goodland has won the right to build the courthouse, Eustis, being the temporary county seat, had begun constructing a courthouse. In November 1887, the county seat spot was up to a vote between Goodland, Eustis and Voltaire. Goodland won the county seat with 872 of the 1495 votes cast. But due to injunctions that were filed which prevented the county commissioners from canvassing the vote, Goodland did not immediately become the county seat. Between November 1887 and January 1888, the town of Eustis and the town company of Goodland were embroiled in court cases and commissioners' meetings. Finally on January 13, 1888, the county seat fight came to a climax when the Homesteaders Union Association from Goodland marched to Eustis to obtain possession of the county records. The county newspapers put out inflammatory news accounts of the rivalry which prompted Governor Martin to send Major General Adam Dixon and Captain Frank McGrath of the Kansas National Guard to Sherman County. By May 10, 1888, Eustis' efforts to become the county seat were exhausted, thus ending a bitter fight.

The Chicago, Kansas and Nebraska Railroad received a charter from the Chicago, Rock Island and Pacific Railroad in 1888 to lay tracks through Sherman County. Goodland was along the rail line and soon became a major trading center. The railroad built a round house, power house, shops and the largest stockyards between Topeka and Denver.

Initially inhabited by Native Americans, the area of what is now Sherman County became the place that J.F. Collier, a buffalo bone gatherer, called home. He moved to the area in 1879, but did not establish a residence until 1882. Other settlers, John Bray and a Mr. Darling, came to the vast area in the western part of the state of Kansas to establish ranches in the spring of 1880. Mr. Bray's sheep ranch was on Beaver Creek, and Mr. Darling's horse and cattle ranch was on the North Fork of the Smoky Hill River. The homes established on these ranches were the first in Sherman County. In 1882, Barney McClusky established a cattle ranch on Beaver Creek, W. T. Clayton established a cattle ranch in the north-eastern part of the county, and a Mr. Holmes and a Mr. Cox established a sheep ranch on the Smoky Hill River at about the same time. All of the gentlemen were the first settlers and were soon joined by hundreds more in the next few years.

Free or inexpensive land was the reason many of these settlers came to this area. The foreign immigrants came from Germany, Sweden and Austria. By 1893, the Sherman County Immigration Association was established for the purpose of advertising the area. All of the population was white in 1900 with 8.9% being foreign-born people.

The county was named in honor of General W. T. Sheman by the Kansas Legislature in 1873 and was organized per Governor John A. Martin's proclamation of September 20, 1886. The same proclamation named Eustis the temporary county seat.

The Chicago, Rock Island and Pacific Railroad issued a charter to the Chicago, Kansas and Nebraska Railroad on March 19, 1886 to build tracks into Colorado. Railroad tracks were built to Goodland and onto the Colorado border. Three new towns were established along the railroad: Ruleton on June 22, 1888; Lanborn, soon after June 22, but on July 5, the name was changed to Kanorado; and Edson on August 10, 1888. Goodland and Kanorado are the only two towns that became incorporated.

The town, which was laid out and platted in December 1885, was first named Leonard after Thomas P. Leonard, one of the platters and a member of the Sherman County Land Association. A real estate office, a school, a drugstore, and a livery stable, as well as the Commercial Hotel, were built the following spring.

Getting a post office proved to be a problem because the name of the town was similar to other town names in the state. After trying 3 times during the summer of 1886 to establish a post office and being refused because of the name, the board of trustees met on August 16 decided to change the name from Leonard to Itasca.

Itasca made an unsuccessful bid for the county seat, and when the railroad came into the county late in 1886, the tracks were several miles from the town. Most of the businesses moved to Sherman Center and Eustis that fall, and the Commercial Hotel and the Swigart Building moved to Goodland in 1887. There is nothing that remains today of the town of Itasca.

Established shortly after June 22, 1888, by the railroad, it was originally named Lamborn. However, the name was changed to Kanorado on July 5. With the town site on the eastern side of the border of Kansas and Colorado, the town was named in honor of those two states. It is the only other town in the county besides Goodland to become incorporated.

The original town site was located on the homestead of John E. Rule and was named Rule. A post office was established on April 23, 1887, and the name was changed to Ruleton. The Chicago, Kansas & Nebraska Railroad came through the area on June 22, 1888, and the post office, which was located in the Errington and Rich Store, was moved to a new location. The railroad built a station just to the east of the Ruleton store, and it became one of the stops along the rail line, along with Edson, Goodland and Kanorado.

Sherman Center, first called Shermanville, was founded in May 1886 near the geographical center of Sherman County. On September 20, 1886, the town was established by Governor John A. Martin's proclamation; the same proclamation also named Eustis the temporary county seat. Shortly after Goodland was founded several miles to the south, the town of Sherman Center ceased to exist.

The town of Voltaire was started by a group of people from Atwood (Rawlins County) on June 15, 1885. It was named for the French writer and philosopher. A post office opened on September 10th of that year in the general store owned by Ira Garver. By August of 1886, Voltaire had reached its peak with a population of 143 and about 45 buildings (businesses and houses).

However, the town of Eustis had been named the temporary county seat, and that was the beginning of the end for Voltaire. Since Voltaire was established on government land, the laws stated that a certain number of individuals had to reside there, and general improvements had to be made to their properties before the land could officially become the town site. So during the winter of 1886, a man and his family were hired to stay in Voltaire until the next spring when the settlers came back, while the townspeople spent the winter in Atwood. The Great Blizzard of 1886 came through the area, and it was a deadly one for the early settlers of Sherman County. Shortly after that winter, the town of Voltaire began to decline. In 1889, the town's post office was closed and the Kansas Legislature vacated the town.