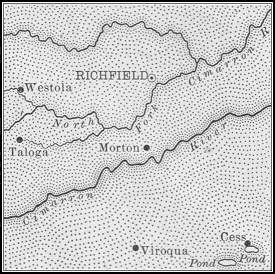 Morton County shares its border with two neighboring states, Colorado and Oklahoma. The current county seat is Elkhart, KS, after a long dispute with the former trading post town of Richfield. More notably, Morton is the home of the Eight Mile Corner, the place where Kansas, Colorado, and Oklahoma meet. It is also home to two Olympic Medalists, Glenn Cunningham and Thane Baker, as well as a champion barrel racer, Elease Tucker.

Morton County was organized in 1886 and is named for Indiana Governor and United States senator Oliver P. Morton. This county once was home to the Kiowa and the Apache until the federal government wiped out the buffalo. The legendary Santa Fe Trail passed through Morton County, and the true story/legend of the William Becknell expedition takes place in Morton County. Becknell and his party had run out of water along the way.  They were forced to kill a buffalo that had just drunk water to get at the water it had just consumed. They then followed the buffalo’s tracks to water, saving the expedition.

In 1944, Morton County was the location of a German POW camp. The people there took advantage of the extra workers, and were able to add improvements to the town and had a particularly successful harvest.