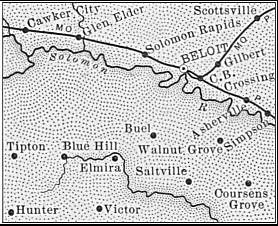 John Rees, an Englishman, was among the first settlers in this area having arrived on April 29, 1866. In 1867, he built a grocery store, and he was also the 1st postmaster for the Asherville Post Office which was established in 1869. Even though the town site was plotted and laid out in the 1870's, it never became incorporated.

The land of Aaron A. Bell was the site picked for a town in 1866. He deeded part of his property to Timothy Hersey, and the two men began to establish the new town. The settlement was named Willow Springs after the springs along the north bank of the Solomon River. However, there was a post office in Douglas County, established in 1861, that already had the name of Willow Springs. Mr. Hersey's hometown in Wisconsin was Beloit, so he chose that name for the new town. The town site's plot was filed with the register of deeds on March 26, 1872, and the city was organized as a city of third class that same year.

This area was settled in 1871 by a man from Stonehenge, England. Maurice Brown homesteaded on land that eventually became the town site of Blue Hill. The name comes from a range of hills that surround the town that are known for a blue hue during the early morning hours.

The town soon had a general store (run by Maurice Brown), a creamery, and a post office. The schoolhouse was built in 1887. The town is now defunct.

The town site was picked in 1870 by four men - E. Harrison Cawker, J. P. Rice, R. G. T. Kshinka, and John J. Huckle. Rice built the first stone building and Cawker built a steam mill. The name came from a game of "seven-up" which was won by Cawker.

This town was laid out and planned in 1871. When it was plotted in December 1872, its name was West Hampton. The name was changed to Glen Elder because of its location in a glen surrounded by box elder trees. When the town was incorporated in November 1879, its population was 275.

The first school was built in 1872 and by 1879, the Central Branch Railroad had come through with its rail lines.

Settlers arrived in the area in 1866 and began to farm their claims. They had to deal with the Indians who raided the settlers numerous times between 1866 and 1870. May 9, 1870 was when 3 men were killed and July 2 was the last Indian raid in the county.

The county was organized in 1870 and Beloit was named the county seat. Mitchell County was named in honor of Captain William D. Mitchell of the Second Kentucky Cavalry, and formerly a private in the Kansas Second Cavalry.

Some of the settlers were of German heritage, most notably in the town of Tipton. Others were of Irish, English and French heritage.

Hunter had been settled in the 1870's by settlers who built sod houses to live in. The town was named for Al Hunter, one of the original settlers, in 1880. A general store and a hardware store were among the businesses that were built.

In 1916, the Salina-Osborne Railroad was building a line through the county, and Old Hunter was about 4 miles from it. The townspeople moved the town site 4 miles west to be close to the rail line. (New) Hunter was organized as a third class city on January 9, 1919.

In 1871, Jacob Marzolf and Henry Kohler arrived in Mitchell County from Wathena, Kansas, to find some land to farm. After spending the winter back in Wathena, they and their families made the move to their new land. By 1879, several other Mennonite families had joined them coming from Illinois, Ohio, and Pennsylvania.

Brittsville was started in 1871 by a G. Beaver when he sought to open a mill on the Solomon River. A store, a post office and a drug store were in Brittsville by 1879.

When the railroad came through in 1879/1880, the town site was moved to the present site - a move of one mile. Alfred Simpson deeded some land on which the new town site stood, and in 1882, the name was changed to Simpson.

Tipton was founded by settlers in 1872 looking to farm their own land. Most of them were from Germany, and a small percentage came from Luxemburg. Others came from France and Ireland in later years.

Established as a post office in the mid-1880's, Victor was located 6 miles east of (New) Hunter. A store was built by a Mr. Paddock, and the post office was moved there from its dugout location.