An overview of copyright as it pertains to instructors and students

What is a License?

A license is a legal agreement that allows a copyrighted work to be used by someone other than its creator. There are two basic categories of licenses:

Note that the "bundle of rights" granted by copyright can be divvied up into licenses any way the creator chooses. If you have a license to use the print version of a book chapter in your class, for example, that doesn't necessarily mean the license also includes the right to post it on Blackboard. Always read licenses carefully.

There are two ways to get a license:

One of the most common types of existing license you may see on educational materials is called a Creative Commons License.

Creative Commons licenses are a type of open license. Open licenses allow you to do some (but not necessarily all) of the Five R's of Openness for free and without requesting permissions:

Creative Commons Licenses use a series of four symbols to tell you which of the 5 R's you can do: 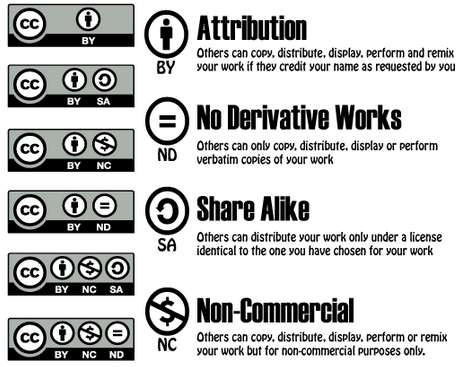